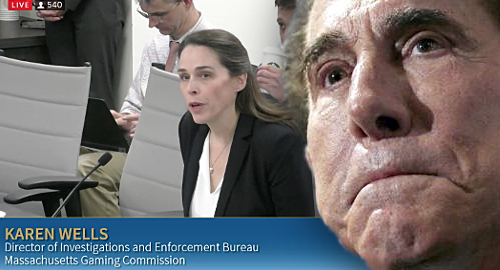 Casino boss Steve Wynn’s $7.5m settlement of a sexual harassment claim dominated a hearing of Massachusetts gaming regulators tasked with determining his suitability to operate in their state.

Wynn is currently building the $2.4b Wynn Boston Harbor, and MGC chairman Stephen Crosby kicked off Wednesday’s hearing by saying nothing must be allowed to shake Massachusetts residents’ confidence in their gaming industry.

Karen Wells, director of the MGC’s Investigation and Enforcement Bureau, noted that the WSJ report had disclosed the existence of a $7.5m settlement Wynn Resorts reached with a former Wynn Las Vegas manicurist who claims Steve forced her to have sex in his office.

Wells said this private settlement was “not part of any court action or litigation” and thus no court documents existed to alert MGC investigators as to its existence. Wells stated that “steps were taken to keep [evidence of the settlement] from the public domain” and that no Wynn official had mentioned this settlement at the time of Wynn’s 2013 Massachusetts casino license suitability hearings.

Wells said the settlement would “remain a critical element” of the bureau’s ongoing review, which would include studying corporate action or lack thereof contemporaneous to the settlement, something Wells characterized as a variation of ‘who knew what and when’.

The bureau’s review will also monitor Wynn Resorts’ corporate response to information now in the public domain, and also determine the current situation’s impact on the company’s financial stability.

General counsel Catherine Blue added that one of the factors that the MGC uses to determine a licensee’s suitability is a “pattern or practice of misconduct” that doesn’t necessarily result in a conviction but nonetheless remains a concern.

Crosby noted that the sensitivity surrounding Wynn’s alleged wrongdoing meant there were limits on what the MGC could publicly disclose, but vowed that the MGC’s probe would involve a “tremendous presumption of transparency to the maximum extent possible.”

NEVADA REGULATORS ASK STEVE TO TURN HIS HEAD AND COUGH
Wynn Resorts’ current brouhaha got a lot less ha-ha on Tuesday after the Nevada Gaming Control Board (GCB) announced it had opened a formal investigation into the allegations surrounding Steve Wynn.

On Saturday, the GCB had said it was still ‘reviewing’ the allegations but newly appointed GCB chair Becky Harris – the first female to ever hold that position – told the Las Vegas Review-Journal on Tuesday that the completion of this review would now be followed by a “thorough and judicious” investigation.

The GCB has broad powers to investigate its licensees and punishment for injuring the reputation of the state’s gaming industry could include seven-figure fines or even license revocation, although the former is far more likely than the latter.

Both Steve Wynn and his company have vehemently denied the allegations, and have suggested they were sparked by the contentious divorce war Steve is waging against his ex-wife Elaine Wynn.

In addition to the Massachusetts and Nevada probes, Macau authorities are conducting their own investigation into the allegations. Wynn’s board of directors has also tasked its independent members with conducting an internal probe.

STOCK SLIDE CONTINUES
Wynn Resorts’ stock lost nearly one-fifth of its value in the two trading days following Friday’s WSJ article, but the stock enjoyed a mild rebound on Tuesday. But (as predicted) this rally didn’t last, as the stock fell another 3.4% on Wednesday, closing at $165.59, down from over $200 at the opening of Friday’s trading.

Standard & Poor’s revised Wynn Resorts’ outlook from ‘stable’ to ‘negative’ on Tuesday, in part due to the uncertainty surrounding Steve’s ability to remain at the helm of his company.

The ratings agency also questioned whether the notoriety could negatively impact the company’s ability to pursue gaming licenses in new markets such as Japan, or even if the company would be forced to rebrand should Steve’s reputation spiral down to Weinstein levels.