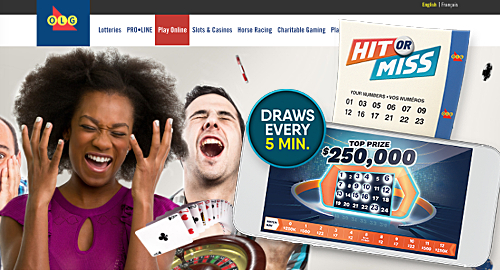 The Ontario Lottery and Gaming Corporation (OLG) is coming under fire for a new online lottery product that draws new winners every five minutes.

Tuesday will see the launch of Hit Or Miss, a new lottery product that combines retail sales, online draws and extremely short windows of opportunity. The product requires users to purchase tickets from one of OLG’s retail partners, then watch the draws via OLG’s mobile app or via its gambling site PlayOLG.ca.

But critics are crying foul based on the fact that Hit Or Miss draws a new set of lucky numbers every five minutes. These critics argue that OLG is essentially dangling gambling catnip in front of individuals who have problems controlling their gambling activity.

OLG appears to be attempting to strike a balance with its new product; keeping retailers happy by requiring the sales to be conducted offline, while drawing in fresh eyeballs to its PlayOLG site, which launched two years ago this month and has so far performed far below OLG’s initial projections.

OLG originally forecast an annual online profit of C$100m but the first full year of activity brought in only around C$15m. OLG has yet to issue its fiscal 2016-17 report, but the Crown corporation was projecting only modest growth for its online division, in part due to Ontario’s auditor general questioning “the optimism of [OLG’s] growth projections.”

OLG’s 2017-18 business plan blamed much of PlayOLG’s woes on competition from the many internationally licensed gambling sites that cater to the Canadian market. OLG estimated that there are around 400k “active online gamers” in the province, of whom 72% “exclusively play in the grey market.”

Small wonder then, that OLG was on board with plans by its Quebec counterparts to block the domains of international competitors. Trouble is, those blocking plans have been called unconstitutional and Canada’s national telecom regulator has stated that Quebec’s plan is illegal. Quebec Superior Court is scheduled to hear a legal challenge of the blocking plans in March.