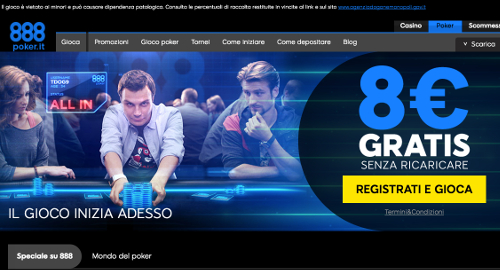 UK-listed online gambling operator 888 Holdings has kicked off 2018 with the official launch of its Italian-facing online poker site.

Last September, 888 CEO Itai Frieberger announced that the company was prepping the arrival of its 888Poker product in Italy’s regulated online gambling market. On Wednesday, 888Poker.it formally made its debut on the boot, joining the company’s Italian-facing casino and sports betting sites.

Italian punters can now avail themselves of 888’s poker offering via iOS and Android mobile apps, while 888 COO Itai Pazner reminded desktop gamblers that they can now access 888’s full range of products “seamlessly and in one place.”

888 is promoting its poker launch with an array of welcome bonuses and a new marketing campaign that will appear in print publications and on Italy’s leading television channels. The campaign is built around the slogan: “Il Gioco inizia adesso! (Let the games begin!)”

When 888 announced its Italian poker plans, the European poker world was still basking in the news that the regulated markets of France, Italy, Portugal and Spain had agreed on a framework for sharing online poker liquidity, which was considered the necessary antidote to these countries’ moribund poker markets.

Since that time, both France and Spain have made progress on the necessary regulatory updates to allow licensees in their respective markets to jump into this shared pool. But Italy’s regulators haven’t even changed into their swim trunks, and may not for some time.

In October, some headline-hungry Italian politicians decided to raise eleventh-hour objections to the liquidity deal, citing tired clichés about cross-border money laundering. In December, Italian operators such as Lottomatica voiced their own concerns, saying shared liquidity would primarily benefit international operators with licenses in all four markets, such as PokerStars and (now) 888.

Italy is headed into a general election in March, and the prevailing wisdom is that no action will be taken on the liquidity issue until after voters go to the polls, and potentially for many months thereafter.