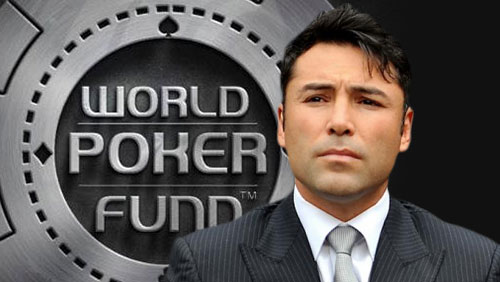 The World Poker Fund Holdings has been busy this Yuletide, finding a new Chairman, creating a new subsidiary, inking deals with Oscar De La Hoya and VXL Payment Solutions, securing an online gambling license in Spain, and planning to develop $50m through an ICO and move into the crypto business.

Only once have I ever welcomed someone to the poker table by showing them a naked photograph of one of the people sitting at the poker table. Just once. Like trying to feed a peach to a puma, I won’t be doing it again.

The game was in Planet Hollywood in the midst of a beauty pageant. There were more bare legs than the table section in Ikea. Nobody could keep their eye on the game. Then Shanna Moakler sat down.

We asked her if she was participating in the beauty pageant. Moakler told us that she was leading a team, but she had once been a participant, winning the Miss New York pageant in the mid-90s, and had appeared in Playboy.

She nodded her head, pulled her phone from her Fendi Peekabo, played around with it and slid it across the table. I looked. There was Moakler in the buff.

“Show it around.” She said.

And that’s how I ended up showing everyone who came to the table a photograph of a naked lady. Someone who once dated Oscar De La Hoya, the founder of Golden Boy Promotions, and the new partner of the World Poker Fund Holdings Inc. (WPFH)

It’s been a busy week for the WPFH.

I get the feeling they’ve scrubbed the decks clean.

A month after Floyd Mayweather entered the online gambling industry by slapping his mug on the side of a new social poker app called Wild Poker, De La Hoya gets in on the act.

The Olympic gold medal winner has signed a letter of intent with WPFH in a licensing deal that will see De La Hoya and Golden Boy Promotions branding used on WPFH social and real-money gaming slot machines.

Earlier in the week, while most of you were strolling through the freezer section looking for a bird, WPFH launched a subsidiary called Celeb Gaming LLC, and a new deal to provide 400 land-based casinos and 90 Indian Tribes in the US with slot machines during the next 12-months. De La Hoya themed machines will feature.

The WPFH has also declared their intention to move into the cryptocurrency business, and open up action in the land of the Bull. They have signed a term sheet to acquire the intellectual property of an unnamed digital currency wallet and will integrate it into their gaming platforms.

There are also plans to host a $50m Initial Coin Offering (ICO) sometime before Q2. There is no name for the coin or what blockchain they will use, but their new chairman, Travis Kasper, expressed his desire to integrate blockchain mining technology into their social games.

Get sharpening that pick.

The WPFH is also entering the Spanish gambling industry. According to a press release, they have received an online gambling license from the Spanish authorities and plan to run an online gaming casino in Castilblanco, Spain as a sub-licensee, and are seeking to nail down a land-based casino licence in the same region.

WPFH have also partnered with VXL Payment Solutions, a payment processor that works in the online casino industry.

But you don’t care about any of that, do you?

I lost you when I told you that there are naked photographs of Shanna Moakler on the Internet.