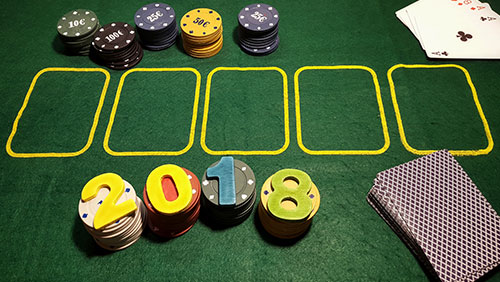 Yes, it’s that time of year, when gambling scribes with nothing to write about start reminiscing about the past or predicting the future. I decided to do the latter, taking a look at five poker-related omens for 2018.

The lawnmower sits in the shed waiting for the day someone touches it, turns it on, and rides it. There is no meaning & purpose beyond the close shave of the green. The palm reader doesn’t have a narrative to weave. It is what it is, a lawnmower with a single purpose, sitting, waiting.

Are you waiting to be touched, turned on and taken for a ride? Do you have a meaning & purpose, or do you, like the lawnmower, have one sole purpose in life? Is it to be a father, a mother, a silent film actor, or a poker player?

It’s another opportunity to push the agony of the past 12-months into the darkest corners of the subconscious and to start afresh. Let’s lose the dice. Maybe we could begin the new year with a plan, how does that sound?

Go and take a shower, the word has it that most of our sharpest thoughts happen when we’re scrubbing a mass of pubic hair that wouldn’t look out of place on top of a rapper’s head, resplendent with an afro comb. In the meantime, I will prepare this for you, and you can read it when you get out.

Here are my crystal ball thoughts on poker in 2018.

1# The Game of Thrones

Would partypoker have gotten their shit together had PokerStars not falling out with their noisiest customers?

Would PokerStars have created the $25k Player’s No-Limit Hold’em Championship and resurrected the European, Latin American, and Asia-Pacific poker tours had partypoker not built the MILLIONS brand?

PokerStars smashes one over the net, and partypoker returns a backhander. The community is entertained and is on the receiving end of the remarkable value.

The last time I checked, PokerStars was the largest online poker room this side of the Army of Darkness t-shirt snugly fitting the woman’s torso in front of me, and 888Poker was the second, not partypoker.

After Santa placed Martin Jacobson underneath the 888Poker Christmas Tree, it reminded me of the power they have in their ranks when it comes to inspirational poker players. Dominik Nitsche, Parker Talbot, Chris Moorman, Kara Scott and now the 2014 World Champion. It’s a formidable lineup.

But what are they going to do with them?

Are they going to sit around the campfire playing the Gipsy Kings on guitars until strings snap, fingers bleed and people move on to find a new playlist? Are they going to bang on about Taking Back the Game while the two P’s in a pod continues to wrest the very game from the heart of that sentence?

Or will they fight back?

Will they emerge from hibernation like a bear with a sore head, or wither away like a hedgehog who can’t see because of the deluge of tiny lice that have crawled into its eye socket?

I vote for a fight.

Phil Ivey used to be the greatest poker player alive. There was no debate. The acclaim stained every level like stray turmeric on a kitchen top: amateurs, pros, pigeons, fish.

In 2017, the Germans jumped into their Panzers and wiped out poker’s hierarchical structure like the waves rushing in to erase the trails carved into the sand by the child lost in thought.

Daniel Negreanu put up a good fight before waving the white flag. And when you looked through the bullet holes in his back you could see the picture of Phil Ivey on a wall.

Where was he while the Germans were taking over?

The greatest pound for pound poker player the world has ever seen was in hiding. The Borgata and Crockford’s baccarat whips cut deep. The man didn’t want to field questions about a potential $19m loss in the courts. A result that questioned his integrity, and branded the word ‘Cheat’ on his forehead.

His wounds are healing.

Ivey recently joined Virtue Poker as an advisor. Ivey is one of poker’s old men in rockers, so for him to join the crypto movement shows that it has the potential to make some serious wonga.

If Virtue is going to make a dent in the online community, then Ivey is going to have to emerge from his cave searching for blood. Let’s hope the guano hasn’t fucked with his mind because he’s been in there a long time.

3# The Emergence of Crypto

I don’t know too much about cryptocurrency, but I know enough to know that I need to own some. I imagine, Ivey, Rast and Colman have already ditched the aged wallets that catch the stray pubes and are now using digital versions.

All three are backing the horse that is Virtue Poker, and we all know horses will run until they break. There’s something about Virtue that makes me believe they won’t end up with a belly full of blades. Maybe I’m biased. I have spoken to one of their founders, Ryan Gittleson, more times than I have talked to my three sisters this year. Ivey, Rast, and Colman provide the official seal of approval.

It will come, but they aren’t in any hurry, to get an MVP into the bloodstream, instead preferring to keep tweaking it behind the scenes like a writer pouring over every sentence with OCD.

There has been nothing but the inside of a balloon on crypto from the Big 3. But that can’t last, especially with the two P’s trying to push each other into a coffin. Virtue will make a reasonable impression in 2018, and the primary online operators will be forced to show their crypto hand. 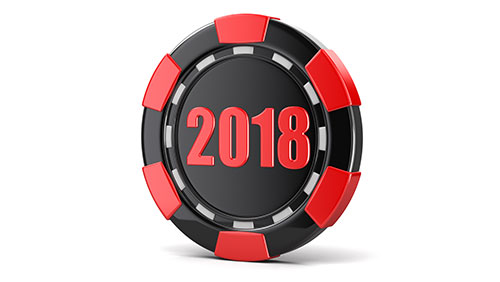 The man has a tongue. I know he does. And since he’s been back for two-years, and nobody has showered him with spit, I doubt anyone will cut it out anytime soon.

Jesus can’t play the role of the avocado seed forever. At some point, he will light a cigar and blow the smoke up our asses that we all desperately crave. To be the World Series of Poker (WSOP) Player of the Year (POY) is an astounding achievement. You may argue that his performance was more stunning than any other.

The WSOP won’t prompt him to speak. And it’s not like he’s been playing rope-a-dope and will finally let loose now we’re all tired of questioning him. He’s a poker player. One of the old school. And the bug took a big bite out of him this summer. You don’t travel to fucking Rozvadov to play poker knowing the whole world is sizing you up for a coffin if the bug hasn’t taken a chunk.

Ferguson is champing at the bit.

He is ripe for the taking.

In 2014, the PGA Tour helped create $133m in charitable funding taking their lifetime earnings over the $2 billion mark. And it all began in 1938 with a $10,000 donation. If poker can stop the algorithms from taking over just that little bit longer, then they can make mincemeat of that amount.

I believe 2018 will be the most significant year ever for charitable donations from poker. I’m not having a dice theory punt here. The presence of the $1m buy-in Big One for One Drop is the obvious reason for this warning. But as the Irish comedian Jimmy Cricket used to say:

Raising for Effective Giving (REG) is getting better at what they do. Like a Mexican wave, giving to Effective Altruism (EA) causes is infectious. More and more top players are choosing to donate a percentage of their winnings to EA charities, and the online poker rooms are seeing this as a form of leverage.

888Poker signed REG Ambassador, Martin Jacobson, and one of the primary reasons the Swede joined the team was the vow to become more involved in charitable giving. You can bet a life-saving malaria net that Jacobson will be doing his best to convince 888Poker that the EA way is the best way.

PokerStars has Liv Boeree and Igor Kurganov on their side of the trench. This beautiful couple helped found REG. The only part of this triumvirate yet to flex their charitable marketing muscle is partypoker, but it will happen. It has to happen. Poker players want more from their choice of supplier, and donating a significant portion of their millions helps them sleep better at night, especially after they have spent the past 12-hours robbing Peter to feed all their little Pauls.