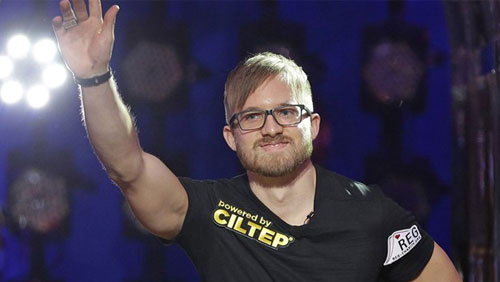 The 2014 World Series of Poker Main Event champion, Martin Jacobson, joins 888Poker as a brand ambassador in a move that he says will help bridge the gap between the players and the board.

During my Poker Routines interviews I ask this question:

Are you consciously trying to emulate the style of a particular player? Do you have people you look to as a model for your game?

Nobody ever tells the truth.

We all secretly want to be someone else. It’s the human condition. Why else aren’t we throwing ourselves off mountain tops, our shattered corpse feasted upon by principled flesh-eating ghouls who feel disturbed when it comes to how they get their lunch?

I want to be like Martin Jacobson, and it worries me because I’m not talking about poker. Everything about the guy screams role model. Good looking, healthy, brilliant, charitable, humble – the type of guy who spends his weekend wheeling very old people down the street.

The only question I have is why it took so long for an online poker room to snap him up?

Or maybe they tried, and failed?

2014, World Series of Poker (WSOP) Main Event winner, and man crush of mine, Martin Jacobson, is the latest member of the 888Poker ambassadorial team. In a very welcome yuletide press release, 888Poker stated that the decision to move to second base came after several successful collaborations between the pair. Jacobson and 888 worked together during the WSOP, where Jacobson represented Team Sweden in their 8-Team Promo.

The Swedish All-Time Live Tournament Money-Earner (20th All-Time, Global) told me via email exchange that one of the primary reasons he’s joining 888Poker is because of their interest in philanthropy.

Earlier this year, Jacobson joined the meta-charity Raising For Effective Giving (REG) as an ambassador, so you can see how 888Poker’s interest in helping improve the lives of others would be an attractive proposition for the Swedish World Champion.

Not a Bad Poker Game

While PokerStars and partypoker continue to see who can roll the best cigarettes and blow perfect smoke circles up each other’s arse, 888Poker is quietly going about their business creating an impressive stable of ambassadors.

Dominik Nitsche is a four-time WSOP bracelet winner, and one of the biggest winners of 2017, earning $4m by winning the $111,111 One Drop High Roller. Chris Moorman is a future Poker Hall of Famer and the most successful online multi-table tournament (MTT) player in the world. Kara Scott is the very best sideline reporter and host in the business. Parker ‘Tonkaaaa” Talbot is one of the most viewed Twitch stars in poker.

And now Jacobson, the man chiselled out of the same type of rock as Patrik Antonius, steps up to the plate.

Just don’t harm that pretty face of his.