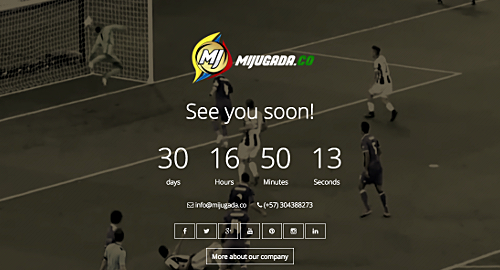 On Wednesday, Colombia’s gambling regulatory agency Coljuegos announced that it had issued its latest online gambling license to Bogota-based Grupo Empresarial Geonline S.A.S., which will operate in Colombia’s regulated online market under the Mijugada brand.

The Mijugada.co website is currently only an ‘under construction’ splash page but does include a counter ticking down to the site’s official launch some 30 days from now.

The concession is valid for three years, and Coljuegos president Juan B. Pérez said the value of the contract was worth COP 3.7b (US $1.25m). Colombia issued its first online license in June and Pérez said the new online sector had contributed COP 3.76b to the regulator’s kitty through the end of November.

Pérez said this summer that he hoped to issue seven online licenses by the end of 2017 and he announced Wednesday that two more applications were currently under review, although he didn’t specify whether either of these would get the nod in the next 10 days. Last month, Pérez stated a goal of having 20 locally licensed betting sites taking wagers on next summer’s FIFA World Cup.

To ensure a strong start for Mijugada and the other five licensees – Wplay.co, Betplay.com.co, Colbet.co, Zamba.co and Codere.com.co – Pérez said the regulator was continuing to work with the National Police and the Ministry of Information and Communication Technologies (MinTIC) to block the domains of internationally licensed online gambling sites serving Colombian punters without local permission, as well as payments to and from those sites.

A little over one year ago, Colombia became the first South American jurisdiction to approve online gambling legislation and Coljuegos hasn’t wasted time transforming those words into reality. The regulator has also demonstrated a willingness to adapt to market realities, such as its decision last month to reverse course and allow its online poker licensees to share liquidity with international poker sites.