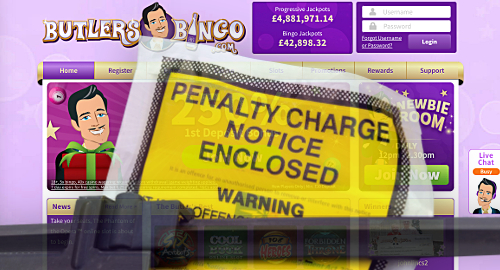 UK gambling regulators have fined yet another online licensee for failing to adequately disclose significant conditions of promotional offers.

On Tuesday, the UK Gambling Commission (UKGC) announced that it had imposed a £100k penalty on online gambling operator Broadway Gaming Ltd for what the regulator deemed to be misleading advertising material on five Broadway-controlled websites.

In June 2016, the UK’s Advertising Standards Authority (ASA) upheld a complaint against an advert that appeared on Broadway’s Butlers Bingo website. The ASA ruled that the ‘Deposit £10. Play £35’ advert failed to communicate significant conditions that applied to this promotion.

A subsequent UKGC probe found similar shortcomings on four other Broadway sites: Bingo Diamond, Casino of Dreams, Dotty Bingo and Rehab Bingo. The UKGC concluded that Broadway had violated the UK advertising codes as well as its UKGC license conditions and codes of practice.

During the investigation, Broadway admitted that its affiliate marketing partners had placed similar adverts on other websites. Broadway acknowledged that it was responsible for the actions of its affiliate partners and provided assurances that it would exercise greater control over content produced by affiliates in the future.

As part of the penalty package agreed to with the UKGC, Broadway issued a statement saying the assessed penalty was a fair cop, acknowledged its weaknesses and pledged to work with the UKGC to ensure there are no further trips to the regulatory woodshed.

Broadway is but the latest online licensee to face the UKGC’s regulatory wrath in recent months, following a raft of six- and seven-figure penalties imposed on the likes of 888 Holdings, Ladbrokes Coral Group, Stan James Online, BGO Entertainment and Lottoland.

The UKGC warned operators this summer to put consumers first or deal with the consequences. Last month, the UKGC publicly warned licensees that the public’s patience with the industry’s bad behavior was wearing thin, while the Competition and Markets Authority (CMA) warned that online operators would face significant curbs on their ability to impose restrictions on promotional bonus offers to customers.