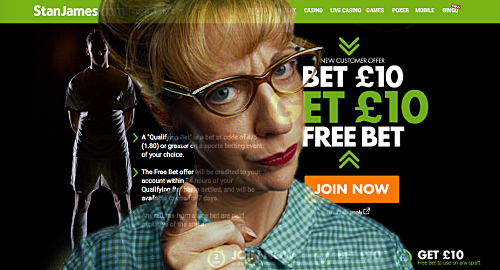 On Monday, the UK Gambling Commission (UKGC) published the terms of a settlement it reached with SJU Limited, which trades as Stan James Online, for its failure to respond to a customer’s problem gambling behavior and for failing to comply with financial requirements aimed at preventing money laundering.

The UKGC launched its investigation in March 2017 after police alerted the regulator to a case involving an individual convicted of stealing from his employer. Some of these purloined funds were deposited with SJU, and the punter/thief wagered a total of £137k over a two-year period, from which SJU ultimately collected £40k.

What’s more, these emails were triggered by purely monetary alerts, and “did not take the holistic view of the customer’s gambling activities that [the UKGC] would have expected.” The UKGC also notes that the customer had self-excluded from online casino products in 2011, suggesting SJU had “inadequate policy and procedures” that contributed to its failures.

The UKGC found fault with the fact that the punter was able to gamble these significant amounts without triggering AML thresholds or SJU subjecting the punter to adequate source of funds checks. “Had SJU followed our guidelines on operators’ duties and responsibilities under the Proceeds of Crime Act 2002, this would not have occurred.”

The UKGC credited SJU for taking “prompt action” to address its shortcomings after learning it was under investigation, for making “immediate improvements” to its policies and procedures and continuing “to develop more robust processes.” SJU has also “recognized the value of investing in staff development providing an enhanced level of service.”

Under the regulatory settlement, SJU agreed to pay a financial penalty of £40k, plus a further £40k to reimburse the employer whose money was stolen, representing SJU’s total revenue earned via the punter. The UKGC urged all licensees to study the details of the settlement and to learn from SJU’s mistakes.

The UKGC has of late been taking a harsher line regarding its online licensees’ social responsibility obligations. In May, the UKGC hit online operator BGO Entertainment with a £300k fine for misleading marketing. In June, online lottery betting operator Lottoland was fined £150k for similarly misleading pitches.

In July, the UKGC warned licensees to improve their social responsibility obligations to put consumers first or face the “full range of enforcement powers.” The following month, the regulator slapped a record £7.8m fine on 888 Holdings for its failure to prevent over 7k self-excluded gamblers from accessing its various sites.