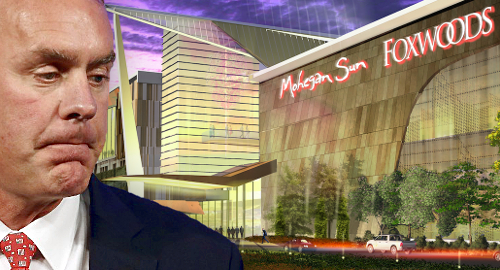 Connecticut’s two gaming tribes have joined the state in suing the federal government over delays in approving a new casino project.

On Wednesday, Gov. Dannel P. Malloy announced the filing of a lawsuit in US District Court in Washington, DC against the US Department of Interior and Secretary Ryan Zinke (pictured).

The suit is intended to give a swift kick to the backside of the Bureau of Indian Affairs (BIA), which has been slow-rolling approval of the Mashantucket Pequot and Mohegan tribes’ joint venture casino project in East Windsor.

At issue is whether the new casino would violate the tribes’ existing gaming compacts with the state, which guarantee the tribes’ slot exclusivity and prohibit the authorization of any new commercial casino project.

With the backing of the tribes, who individually operate the Foxwoods and Mohegan Sun casinos, the state approved legislation this summer to amend the compacts and approve the new casino, which is to be built off tribal land near the state’s border with Massachusetts. However, the legislation was conditional on receiving the BIA’s approval of the amended compacts.

The Indian Gaming Regulatory Act (IGRA) requires the BIA to either approve or disapprove the amended compacts within 45 days but Zinke has so far refused to issue a final ruling. In September, a BIA official said the bureau saw no reason to weigh in on a commercial casino project. The state’s lawsuit asks the court to order Zinke to publish a notice of approval of the amended compacts.

The tribes, who have argued that the BIA’s inability to reach a decision is a variation on ‘silence = consent,’ announced earlier this month that they planned to commence construction on the project by the end of the year.

The new casino is intended as a hedge to keep Connecticut gamblers from flocking across the border to MGM Springfield, the flashy $960m MGM Resorts property that will open in Massachusetts next September.

MGM has fought against approval of the new tribal casino and MGM legal counsel Uri Clinton told Hartford Business that the tribes were mistaken regarding Zinke having violated IGRA’s edicts.

According to Clinton, Zinke’s inaction maintains the status quo, and “approving a new, third casino is the opposite of maintaining the status quo … No lawsuit, not even one backed by the governor, changes those basic facts.”