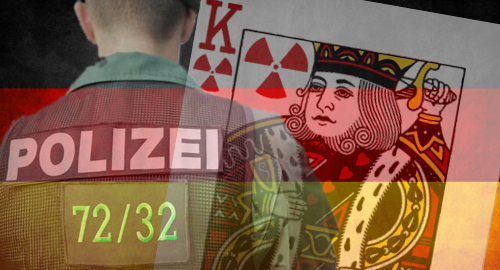 German authorities are investigating what a Berlin restaurant owner was doing with a deck of playing cards marked with a radioactive substance.

On Tuesday, German police announced that a routine inspection earlier this month at a waste treatment facility in Berlin-Lichtenberg had turned up playing cards dosed with iodine 125, a radioisotope used in medical procedures.

The radioactive trail led police to a garbage truck, and an investigation into the route taken by this truck and other garbage found with the cards eventually led police to an unidentified 41-year-old restaurant owner. Police said they found a total of 13 irradiated playing cards, all of which were “the same color.”

The Berlin police noted that they detected higher than usual radioactivity in the suspect’s restaurant, as well as in some adjoining facilities, including an Asian market, a karaoke bar and an apartment.

Police said nuclear cleanup crews had been dispatched to the scene and reassured the public that the radioactivity levels didn’t pose a threat unless a person came into direct physical contact with the exposed areas.

Berlin’s police chief indicated that the cards were most likely tagged with the radioactive substance in order to allow card cheats to identify the value of certain cards through the use of a detector hidden in the cheat’s clothing. Police said their investigation is ongoing.

Amazingly, this scam isn’t even that unusual. In 2014, Vietnamese media reported on a man who scammed other gamblers through radioactive-marked cards that caused a sensor concealed on his person to vibrate when specific cards were in play. Chinese officials have also detained gamblers carrying dice treated with radioactive material.

Tune in tomorrow, when ‘edge sorter’ Phil Ivey tells a casino’s punto banco dealer that the reason Ivey and his female Asian companion are wearing lead gloves at the gaming table is because they’re just really superstitious.