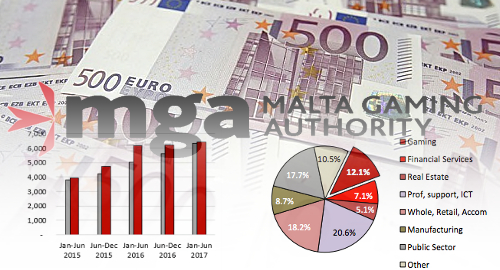 Malta’s gaming industry accounted for over 12% of the Maltese economy in the first half of 2017.

On Wednesday, the Malta Gaming Authority (MGA) released its interim report covering the six months ending June 30, during which Malta-based gaming operators contributed €556m of gross value to the local economy, 10.4% higher than in the same period last year.

Of these licensed companies, 275 held online gambling licenses, up from 259 at the end of 2016. The MGA received 119 applications for new online licenses in H1, only nine less than it received in all of 2016, which the MGA cites as proof that it has “re-established its position in attracting new investment in the sector.”

In January, the MGA announced a new ‘controlled skill games’ licensing category, and a total of 13 such licenses were issued in H1, 10 for B2C operations along with three supplier licenses.

In terms of payments, MGA licensees experienced a shift in customer preferences. For deposits, the share of customers using E-Wallet and other online accounts dropped from 26% in H1 2016 to 21.2%, while those using bank transfers rose from 25% to 30.1% in H1 2017. Similar, but less severe shifts were seen in withdrawal figures.

The MGA is currently conducting a ‘sandbox test’ of the impact on Malta’s economy if MGA licensees are permitted to conduct transactions using digital currencies such as Bitcoin. The MGA’s interim report offered no update on how this test was proceeding.

MGA-licensed companies employed a total of 6,407 full-time staff in H1, although a survey the MGA conducted at the end of 2016 which included indirect employment stemming from the gaming industry brought that full-time employment figure up to 9k. Of these 6,407 direct full-timers, 5,542 were employed by remote gaming operators, up from 5,237 at the end of 2016.

The MGA’s report indicates that the regulator increased its enforcement game over the first half of 2017, cancelling one license, suspending four others, while imposing fines totaling €90k for regulatory breaches. The MGA also conducted 74 audits and 921 due diligence tests to ensure its licensees were complying with their obligations.

The MGA also says it continues to improve its response to player complaints. Players filed a total of 2,081 complaints in H1, up 17.5% year-on-year, while the MGA says it resolved 1,861 of these complaints.

That said, the MGA recently made headlines for all the wrong reasons when two directors of Malta-licensed live casino supplier Medialive Casino Ltd were arrested in Italy on charges of illegal gambling. A Florence prosecutor publicly complained about a lack of cooperation from Maltese authorities that limited the scope of the Italian action, while MGA execs claimed they hadn’t been contacted regarding the investigation.