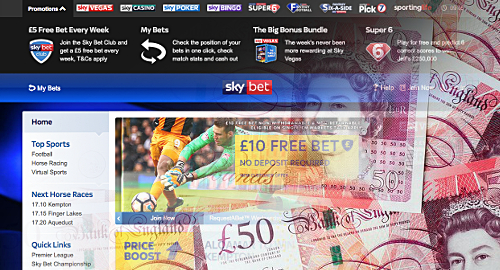 Online gambling operator Sky Betting & Gaming (SB&G) has confirmed its status as a major UK player with the release of its fiscal 2017 report card.

Mobile continues to be a source of strength, with mobile channels’ share of overall revenue improving 12 points to 82% in the most recent report as mobile log-ins rose more than threefold over the past three years.

The past year saw SB&G’s workforce add nearly 200 jobs, bringing its total workforce to 1,253. The company has also expanded geographically, launching licensed operations in Italy in late 2016 and hanging out its shingle in Germany as of this month.

The government hasn’t signaled any plan to hike the 15% online point of consumption tax it imposed in December 2014 but Flint suggested it was “not inconceivable” that the government would look to squeeze the industry to make up revenue shortfalls in other areas, such as new restrictions on fixed-odds betting terminals in high street betting shops.

Flint dismissed talk that SB&G would join the UK online gambling market’s current mergers & acquisition square dance, saying the company has “no plans to participate in any consolidation.” Flint suggested the company’s hedge fund owners CVC Capital Partners might consider a public float for SB&G at some future date but there are “no current plans” to do so.