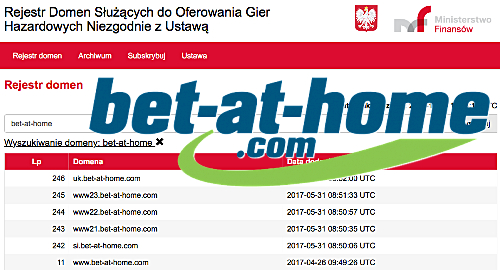 Figures released this week show Bet-at-home, a Frankfurt-listed subsidiary of French gambling operator Betclic Everest Group, generated revenue of €108.7m in the nine months through September 30, an 8.3% improvement over the same period last year. The momentum builds on Bet-at-home’s Q2 results, which the company hailed as its best ever quarterly performance.

Third-quarter revenue actually took a step back on a year-to-year basis, falling to €31.9m from €35m in Q3 2016. The company noted that its online gambling domains were “subject to blocking measures in Poland” as of July 1, the deadline given by Polish regulators for international operators to get a Polish license or GTFO following last year’s amendments to local gambling laws.

Bet-at-home claims Poland’s actions “are considered as a violation of European legislation” regarding the free movement of goods and services between European Union member states. Bet-at-home further claims that “extensive legal action was initiated in this respect,” but that hasn’t convinced Poland’s Ministry of Finance to expunge the six Bet-at-home domains currently doing time on the country’s online gambling blacklist.

Getting back to Bet-at-home’s financials, the company’s year-to-date revenue rise came entirely from its online casino operations, as sports betting revenue took a 2% dip to €48.1m while online gaming shot up over 18% to €60.6m. Betting duties from operations in regulated markets were up more than one-fifth to €14.5m.

The company reported earnings of €8m in Q3, bringing its year-to-date earnings total to €25.4m, up 19% from the same period last year. With no major sporting event on the calendar, the company achieved a 4.3% reduction in marketing costs while still adding an extra 300k new customers, bringing total registered customers to 4.8m.

Looking ahead, Bet-at-home projected full-year revenue to come in around €144m and earnings to come in between €34m and €38m.