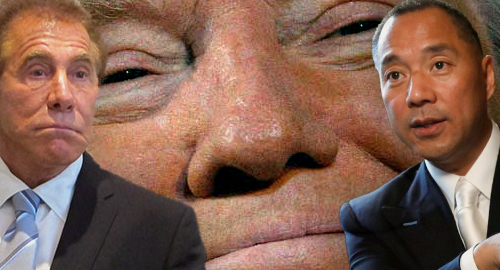 Steve Wynn, CEO of casino operator Wynn Resorts, has been accused of attempting to secure the deportation of a Chinese billionaire who’s been tweeting dirt on Beijing corruption.

On Monday, the Wall Street Journal reported that Steve Wynn (pictured left) had delivered a letter from Beijing to US President Donald Trump seeking the deportation of Guo Wengui (pictured right), a Chinese billionaire/dissident currently living in Manhattan in self-imposed exile.

Since fleeing China in 2014, Guo has been using his Twitter account to accuse multiple high-ranking Chinese officials and prominent businessmen of government-related corruption. Guo, who has applied for political asylum in the US, intensified his corruption allegations just as China commenced its 19th Communist party congress, at which President Xi Jinping is to be confirmed for a second five-year term.

According to the WSJ report, Wynn – who was appointed finance chairman for the Republican National Committee in January – hand-delivered the letter from Beijing seeking Guo’s deportation at a private dinner with Trump this summer.

Trump reportedly referenced the letter during a June meeting in the Oval Office, asking his secretary to bring him “the letter that Steve brought.” Trump reportedly told his advisers that “we need to get this criminal out of the country.”

However, Trump was reportedly talked out of proceeding further after it was pointed out that Guo was a paid-up member of Trump’s exclusive Mar-a-Lago club in Florida. Exactly which aspect of this tale represents the larger scandal is up to the reader to decide.

Wynn Resorts marketing director Michael Weaver issued a formal statement saying “that report regarding Mr. Wynn is false. Beyond that, he doesn’t have any comment.”

That Wynn would serve as Beijing’s emissary isn’t entirely beyond the realms of possibility. Wynn’s operations in China’s special administrative region Macau, which include the newly opened $4.2b Wynn Palace integrated resort, accounted for nearly half of the company’s Q2 revenue.

What’s more, Wynn’s casino concession is up for renewal in 2022, and both Beijing and Macau have been cagey on what the process will involve. The most recent official statements have suggested the six concessionaires will be required to ‘rebid’ rather than ‘renew’ their licenses, and helping to extinguish a pesky whistleblower could theoretically garner some significant brownie points.