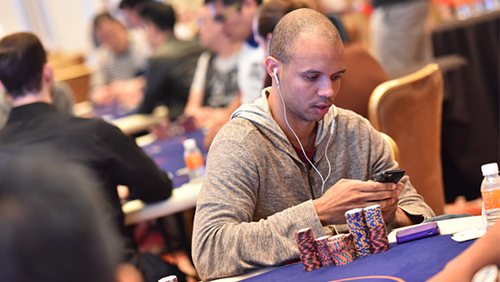 Three short tales rolled up into a 600-word masterpiece including a rare sighting of Phil Ivey, a prediction from Phil Hellmuth, and a spot of charitable jiggery-pokery from Jamie Gold.

It’s not easy to keep up with Phil Ivey.

The former king of poker ditched his Twitter account when his IveyLeague empire hit the dirt with a harrowing humming hail of hard luck stories.

I doubt he’s a SnapChatter.

The last time he used a Periscope was more likely on a private submarine owned by one of his billionaire buddies.

not turned him into a starving dog continually scratching the fleas from behind his ear.

Phil Ivey is in China making some money.

Or at least he was in China a few days ago.

Ivey took part in a series of Sit n Go games with players who had qualified for the special event via the app. After the games, Ivey signed t-shirts for the fans and took a few questions from the media, albeit keeping more in than out.

When asked why he didn’t appear in many live tournaments, Ivey said he had personal issues, and when asked what games he plays he said I can’t comment.

If you want to accidentally bump into Mr Ivey, then get your ass to the Great Wall of China because that’s where he was planning to be next.

Switching from one Poker Hall of Famer to another, and Phil Hellmuth doesn’t believe we will see another Poker Boom. Instead, we will experience a Sonic Boom.

The Poker Brat revealed his prediction during an interview with Chris Kudialis of the Las Vegas Sun, pointing to the growth of the game in Europe, and legalisation of poker in the US at a federal level, as key milestones.

Hellmuth was also asked about his Poker Brat persona. The 14-time World Champion explained that it’s a show for the tables only. He then went through a Hulk Hogan eat your vitamins, and say your prayers, kind of speech when he explained how he had always been faithful to his wife, never done drugs, and hardly drinks as reasons why people should give him a break when he loses it.

“A few weeks ago, I said the F-word 59 times at a World Poker Tour event live stream, but I really am trying to get away from that,” Hellmuth told Kudialis.

I’m not sure what Hellmuth should work on first, his temper, or his of knowledge of phrases like ‘sonic boom’?

Hopping from one former WSOP Main Event Champion to another like Frogger used to do back in the day, and Jamie Gold is hosting a charity poker tournament in October.

There is a red carpet event from 15:30-16:30 with the tournament beginning at 17:00. The winner received six months poker coaching from Jamie Gold, including a seat in the WSOP Millionaire Maker where Gold will be on hand to offer personal tuition throughout the event ( I would prefer 30-seconds of poker coaching from Rosario Dawson).

All proceeds will be spent on books and school supplies for a range of Houston schools devastated by the recent Hurricane.