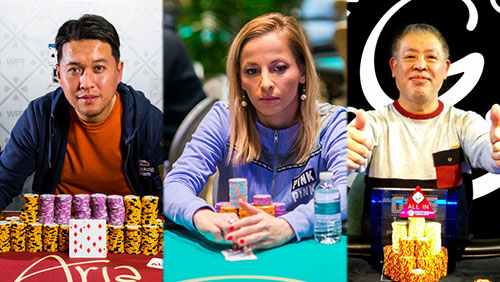 The Poker Masters on Poker Central has captured your attention. I get that. But the rest of the live tournament scene hasn’t gone into a deep freeze.

Here are three live tournament tales to catch up on and we’ll begin at the Commerce Casino, Los Angeles.

And he’s continued to collect a six-figure score in each of the proceeding years.

In 2015, he defeated 402 entrants to capture the $124,590 first prize in the LA Poker Open at the Commerce Casino, in LA. In 2016 he lopped off the heads of 528 entrants to win his second gold ring, and $170,286, after beating Eli Elezra in heads-up action to take down the WSOPC Planet Hollywood Main Event in Las Vegas.

Earlier this year, he added a gold bracelet to his gold ring collection when he defeated 124 entrants, including a final table that housed Jason Mercier and Dylan Linde, to take home the $296,941 first prize at the WSOP Global Casino Championship.

And he’s done it again.

fell $100,000 short of its target. The Commerce had to show their charitable side, as did Yu when he gave 5% of his winnings to help those flattened by Hurricane Irma.

Keep your eye out for the name Anna Antimony.

As last year drew to a close, Antimony finished runner-up to Adam Goldberg in a $560 DeepStack event as part of the Borgata Fall Poker Open. Antimony waded through a field of 1,659 before coming up against the buffer stops of Goldberg. She earned $126,146, her greatest payout to date.

Her form followed her into the Borgata Summer Poker Open.

The run isn’t over.

Antimony’s lifetime earnings move over the $400,000 mark with that win.

We will switch continents to finish off our trio of tournament tales and head to the UK where Leung Cheung defeated a field of 308 entrants to bank the £37,900 first prize in the £500 buy-in Grosvenor United Kingdom Poker Tour (GUKPT) Main Event in Leeds.

Cheung, who also finished second and third in side events building up to the Main Event, defeated Renee Xie in heads-up action to take the title.

The final table bubble boy was none other than the Grosvenor ambassador Will Kassouf. Fellow representative Jeff Kimber finished 21st.