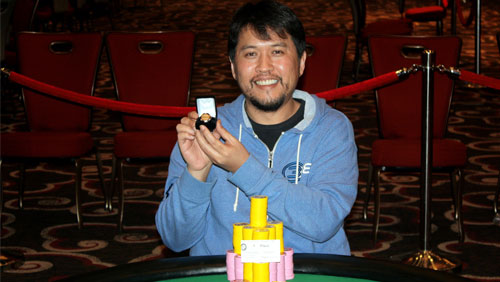 Sean Yu defeats Dan Stir, in heads-up action, to take the gold ring and first prize of $101,881, in the World Series of Poker Circuit Main Event at Harrah’s Southern California.

Sean Yu has taken his all time tournament earnings to the $425,125 mark after defeating Dan Stir, in heads-up action, to take the gold ring, $101,881 first prize and a berth in the season ending World Series of Poker (WSOP) National Championships, after victory in the WSOPC event at Harrah’s Resort Southern California.

Jake Cody once told me that live tournament players are all about the glory. “There are easier ways to win money in poker than to play live tournaments,” he said – and he knows a thing or two about poker.

Yu used to have an easier way of winning poker money. A cash game regular for many years, it was only the beginning of 2014 that he decided to move away from the grind, and instead focus his attention on live tournaments – what an inspired decision that has turned out to be.

You may remember in the summer that partypoker, the World Poker Tour, and the Aria Poker Room, attracted 3,599 entrants, in a brand new format known as the WPT500. What you may not remember is the victor was Sean Yu. He pocketed $260,000 for that victory, and now has another $101,881 to go with that courtesy of his win in San Diego.

This field was slightly smaller than the one he toppled at the Aria. 283 entrants created a total prize pool of $242,500; 30-players were paid at least a minimum of $2,878, and there were some familiar names who did indeed get that paycheck – or one a little bit bigger.

WSOP bracelet holders: Brandon Paster (9th), Jordan Morgan (29th), and Eric Baldwin (30th) made the money, as did the former WSOP Nov Niner Soi Nguyen (34th). According, to the Lords and Masters at the WSOP the Southern California event moved along so quickly that the action ended one day short. You may think that’s great news for the staff, until they decide to take their newly emerged day off by doing their bollocks at the tables.

It was a final table devoid of any news breaking stories. The runner-up was making his second WSOPC Main Event final table in a matter of months, after finishing fifth in Lake Tahoe; and there was, of course, Paster, the man who defeated Marcel Vonk to capture a $1.5k WSOP bracelet in the summer.

Not that any of that was going to bother Yu. When three-handed he cracked pocket kings twice on his way to victory. When your name’s on the ring, it’s on the ring.