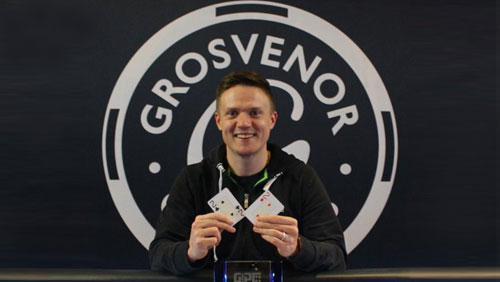 After 317 players entered for £1,000 at the GUKPT Manchester Main Event, the tournament concluded late on Sunday night with a deal, a pair of Bens and one huge coinflip to see Ben Dobson walk away with £75,510 and the GUKPT trophy.

The final day began with just 20 players remaining, all of them already in the money, but everyone had their eyes on the final table where the really big money could be won. By the time the final nine had made it, there was a very clear chip leader:

It was Rob Binkley who would depart first, losing in a big clash against short-stack Justin Devonport to leave himself with a mountain he couldn’t climb. Before the players could reach the next scheduled break, there were only seven in the fight for the title, as David Johnson, who hadn’t come into play short-stacked, entering the action 4th of the nine in terms of chip rankings, busted. Unable to get going, he finished 8th for £7,150.

With Wadey Ashraf all over the final table, other players needed to step up the aggression if they were going to take him on. Justin Devonport made an attacking move of his own, moving al-in with pocket sixes, but he was called by the eventual runner-up Ben Winsor, whose ace-queen hit a queen on the flop to reduce the field to six-max size.

Garry Wilson had come into play short-stacked and his time at the final table ran out when his last 10 big blinds went into the middle, committed with a suited queen-seven. Ashraf had sniffed out the play, however, and called it off with king-four of clubs, hitting a king on the flop and reducing the number of players while increasing his already impressive chip lead.

Winsor’s win a few hands earlier had given the experienced British player 1.5 million chips to Ashraf’s 2.1 million, but others were looking far behind the leader. Nathan Watson had just 300,000 chips to his name and he pushed them all over the line with ace-deuce. Winsor made the call with ace-eight and held to bring himself closer to the top of the leaderboard with four men left battling for the GUKPT Main Event title in the city famous for Oasis, football and the ‘Madchester’ scene.

One player who wasn’t ‘Mad for it’ was Dobson, but his tune soon changed when he managed to find a miraculous flush to save his tournament life. All-in with pocket sevens against Ashraf’s pocket jacks, one of Dobson’s sevens was a diamond, which matched the first four cards out of the dealer’s deck perfectly.

Just 40 minutes later, Ashraf was sensationally out in 4th place for what must have felt like a disappointing result of £22,370. All-in for just 800,000 chips with ace-jack, Ashraf was up against Ben Winsor’s king-queen of hearts, and once again was flushed out by the turn, two hearts on the flop compounded by the six of hearts on the turn to send Ashraf home, no doubt with nightmares of red cards dancing in front of his eyes all the way.

With three players left, the stacks changed dramatically, with Dean Perry holding almost half of the chips in play at one stage, but two big pots, both to Dobson, went against him and proved that in no limit hold’em, anyone can go from chip leader to the rail in a matter of minutes.

Dobson had enjoyed aces against Perry, and heads-up, had the lead, with 5.1 million chips clearly ahead of Ben Winsor with 1.2 million. A huge coinflip changed the course of the final, however, with the latter doubling up with queen-jack, overtaking Dobson’s ace-ten to see a deal done. The two men guaranteed themselves a big payout each, with Dobson collecting £72,000 to Winsor’s £68,000.

With just £3,510 on the line as well as the trophy, Dobson claimed the victory when Winsor moved all-in for two million chips with ace-five. Dobson made the call wit pocket deuces and the coinflip went in his favour as the board gave him a set on the turn. Once he faded the gutshot to the wheel on the river, Dobson was the GUKPT Manchester Main Event champion, while Winsor was happy to have won the coinflip that earned him plenty more buy-ins as he finished runner-up.

Convicted thief wins at poker, loses it all to the taxman
Erik Gibbs
16 August 2018
.