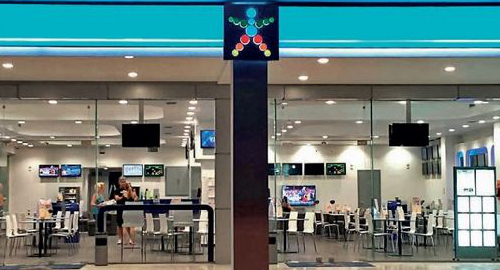 Greek betting and lottery operator OPAP saw its net profit fall by more than one-third in the second quarter of 2017 as revenue declined and the cost of marketing new product rose.

OPAP CEO Damian Cope said the company’s results were “commendable” given the tough comparison with Q2 2016, which contained the majority of the Euro 2016 football tournament.

Total betting revenue was down only 1.2% to €93.2m, as the Euro 2016 impact was partially offset by the launch of new virtual games product in April. Lottery revenue was down 8.4% to €190m due to unfavorable jackpot rollovers in OPAP’s Joker product.

New products require customer awareness, and OPAP reported its marketing expenses rising more than one-quarter to €20.4m, led by a 37.7% rise in advertising costs. Other expenses were also up sharply, including IT related costs, which shot up 41.4%.

Since the quarter ended, OPAP began rolling out its OPAPBET self-service betting terminals (SSBT). The technology comes courtesy of Playtech’s BGT Sports division, with which OPAP inked a software and services deal in February. There are currently 572 SSBTs in operation across 286 shops and the company aims to have around 1,500 machines in action by the end of the year.

OPAP was caught off guard last month when the Greek government tabled draft legislation that would cap the nation’s total number of VLTs at 25k. OPAP had struck a deal with the government allowing it to operate 35k VLTs, of which 16,500 would be rolled out by the company with the other 18k subcontracted out.

On Wednesday, Cope told analysts that the revision of the VLT terms “will have a neutral effect for OPAP,” in part because the legislation also calls for an eight-year extension of OPAP’s betting license and frees OPAP from having to subcontract any of its VLTs.

As for OPAP’s upgraded digital presence, which includes a new Betgenius-powered online sports betting platform, the company says its new online and mobile products will be ready to launch by the end of the year. The company is planning a new OPAP brand campaign to coincide with the digital upgrade.