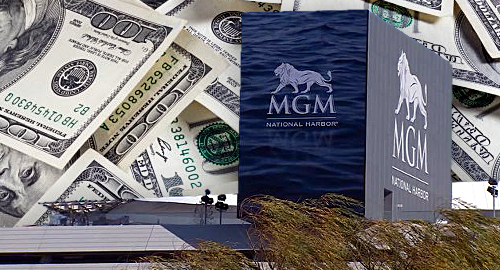 MGM Resorts’ National Harbor casino set a new gaming revenue record in August just as MGM was selling the ground underneath it.

Figures released Wednesday by the Maryland Lottery and Gaming Control Agency show the state’s six casino operators reporting combined gaming revenue of just under $137.5m, up 37.1% from the same month last year but down $1.25m from July 2017.

National Harbor continued to lead the pack, reporting combined slots and table game revenue of nearly $52.9m, a new record for the property, easily surpassing the $51.2m the casino earned in March. The gains came courtesy of lucky tables, which improved by $2.2m from July’s figure to $27.3m. National Harbor has now generated over $50m in five of the past six months (and April’s total was $49.9m, which in golf would be a gimme).

MGM celebrated National Harbor’s success by selling the land underneath the property to MGM Growth Properties (MGP), the real estate investment trust the company spun off two years ago. The deal involves a MGP subsidiary purchasing the property’s lease, after which MGM will lease the property back from MGP.

This accounting sleight-of-hand shuffle calls for MGP to pay MGM $1.1875b, including $462.5m in cash, the assumption of $425m in property debt and $300m worth of new MGP shares. In return, MGP gets to jack up National Harbor’s rent by $95m, but since MGM owns 76% of MGP, what’s a few more zeroes on the same side of the ledger?