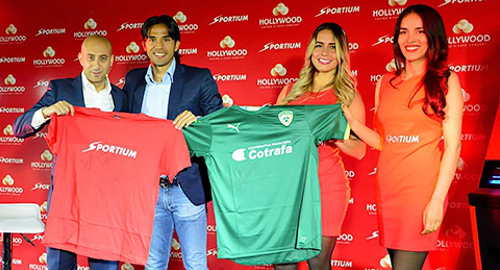 The Sportium sports betting joint venture of UK bookies Ladbrokes and Spanish gaming operator Cirsa says it plans to launch online operations in Colombia before the year is through.

Earlier this month, Sportium execs gave a media presentation in Bogota’s Hollywood Casino, at which the company has chosen to plant its land-based sports betting flag. Sportium trotted out Colombian footballer Fabián Vargas, who plays for Bogota-based La Equidad, to help kick off the event.

Sportium CEO Alberto Eljarrat said the company’s application for an online license from local regulator Coljuegos was at an “advanced stage” and Sportium hoped to launch its Sportium.com.co site “very soon.”

Sportium is a major betting brand in Spain and also has an online presence in Mexico via its Casinolife.mx site. Last September, Sportium opened an office in Panama and Colombia is the next step on the company’s Latin American expansion horizon.

Last October saw Colombia become the first South American jurisdiction to formally legalize online gambling, but Coljuegos has to date only issued a single online license to local operator Aquila Global Group’s Wplay brand. Coljuegos execs have said they expect seven licensed online operators to be up and running by the end of the year.

URUGUAY PUMPS THE BRAKES
While Colombia appears to be moving glacially slow toward realizing its licensing objectives, the pace is still too fast for its counterparts in Uruguay. Earlier this month, Corporación Iberoamericana de Loterías y Apuestas de Estado (CIBELAE) president Luis Gama slammed Colombia for planning to issue “an excessive number of licenses” for online gambling.

Gama told REPÚBLICA Radio that CIBELAE was working with the Ministry of Economy and Finance on measures to “combat the game that is currently being exploited unofficially.” Only after ridding itself of those pesky unauthorized internationally licensed online operators will the government approve a single state-run online betting operation.

Gama said the government would also take steps to ban advertising and promotion of unapproved gambling sites, such as the recent appearance of Sportingbet logos on a local football team’s jerseys during a televised match against a Brazilian side.

Gama didn’t offer a timeline for when more details of this government initiative will be made public, but the Uruguayan Chamber of Deputies has already approved a new tax on land-based gambling winnings and the Senate is expected to follow suit in short order. While online gambling remains illegal, the legislation is vague enough that anyone caught playing a virtual slot could theoretically be hit with a tax bill in addition to other sanctions.