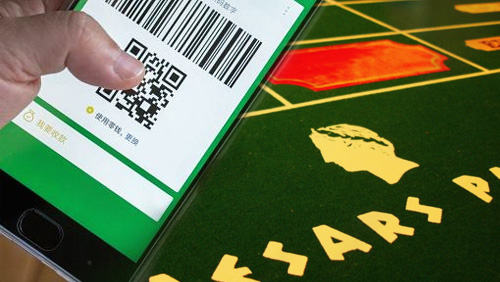 Unlike its neighbors Las Vegas Sands, MGM and Wynn Resorts, Caesars does not have a substantial presence in China’s gambling mecca, Macau—something that the company hopes to solve by becoming the first Strip operator to allow Chinese tourists to pay for food, concert tickets and retail items using the popular mobile app.

Currently, Caesars has 16 point of sale locations inside Caesars Palace, The Linq Promenade and Paris Las Vegas that accept WeChat Pay payments. Bruce Bommarito, corporate VP of international marketing for Caesars Entertainment, told the Las Vegas Review-Journal that the company will roll out the WeChat Pay function to “dozens of more” locations in Las Vegas before the year ends.

“We want to do this for our Chinese customers to make them feel at home,” Bommarito told the news outlet. “We have been working hard on the Chinese market for some time.”

The number of Chinese tourists in Las Vegas has been increasing in recent years, especially as the Asian country’s economic growth allowed millions of its residents to travel internationally. In September, China’s Hainan Airlines received the green light to offer the first-ever nonstop flights between China and United States. The service, which will utilize Hainan Airlines’ fleet of 787 Dreamliner aircraft, will be offered three times per week.

While international guests made up only 16% of Vegas visitors in 2015, Vegas casinos are eager to lure Chinese tourists, although not because they rank #1 in terms of their willingness to spend money while traveling.