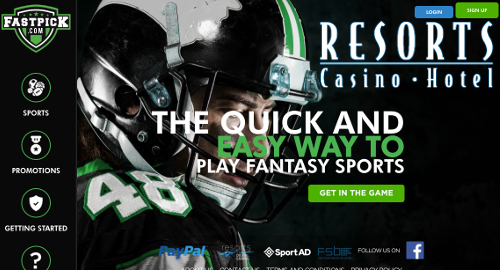 On Monday, the Associated Press broke the news that FastPick.com had begun offering online daily fantasy sports contests in tandem with Resorts Digital Gaming, marking the first time a casino based outside Nevada offered its customers a real-money DFS product.

The launch of FastPick, which is powered by Sport Analytics & Data (SportAD), is all the more notable given its structure, which strongly resembles traditional parlay wagering. FastPick customers play against the house, rather than each other, with wagers that start as low as $5 for payouts that max out at an impressive $100k.

FastPick offers players a range of preselected head-to-head athlete matchups in a given sport – current choices are NFL, NBA, MLB and English Premier League – from which players select anywhere from three and 10 matchups. The athletes’ performance determines the score, and if all of the athletes chosen by the player outperform the house’s lineup, cha-ching.

As with New Jersey-licensed online casinos, FastPick is only available within the state’s geographical confines. Resorts President Mark Giannantonio told the AP that the casino hoped to add FastPick kiosks to its roster of physical gaming options “soon,” saying “the idea has always been for the brick-and-mortar casino to be integrated as much as possible with our online business.”

FastPick is currently offering players the ability to fund their wagers via PayPal, but more payment options are reportedly in the works. However, much will likely depend on whether federal authorities decide to challenge whether FastPick’s wagering model falls within the fantasy carveout contained in the 2006 Unlawful Internet Gambling Enforcement Act (UIGEA).

That an Atlantic City casino would be willing to test the boundaries of what constitutes DFS is perfectly in character with the state’s traditionally ornery approach to federal gambling law. FastPick’s launch comes just weeks after New Jersey learned that the US Supreme Court would hear its appeal of lower court rulings blocking the state’s multi-year quest to overturn the 1991 federal law prohibiting sports betting.