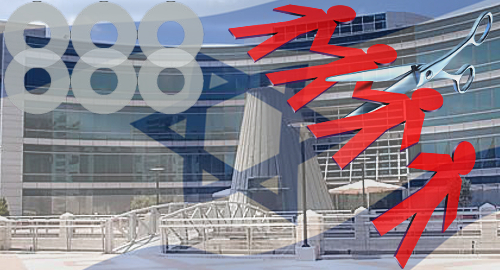 UK-listed online gambling operator 888 Holdings is the latest operator to trim its payroll as part of a self-described “streamlining” process.

Last week, Israeli media outlets reported that 888 was in the process of laying off ‘several dozen’ of its local staffers, part of the company’s plan to achieve “a reduction in the number of personnel in a number of sites around the world.” The layoffs, along with other ‘efficiency’ measures, are expected to be completed by the end of the month.

888’s global workforce numbers around 1,300, most of which are based out of the company’s offices in Herzliya, a noted tech-hub in the Tel Aviv district. 888’s staff reduction follows hot on the heels of rival betting operator William Hill’s decision to close its Tel Aviv office, resulting in the redundancies of over 200 employees.

The soaring value of the Israeli shekel versus the British pound has been cited as a factor in both companies’ cost-cutting moves, along with the increased cost of operations in many regulated markets. 888 recently joined the flood of operators exiting Poland following the launch of that country’s strictly regulated, punitively taxed online gambling market. 888 also announced its withdrawal from Australia earlier this year.

Israeli media outlet Calcalist quoted an 888 spokesperson saying the layoffs were also due to “the tightening of regulatory requirements that the company is required to comply with as part of its license terms.” 888 recently confirmed that it was the subject of an investigation by the UK Gambling Commission into whether 888 was honoring its social responsibility obligations, with a focus on the effectiveness (or lack thereof) of its self-exclusion tools.

888 turned in a solid performance in 2016, with revenue hitting an all-time high thanks to double-digit gains by its mainstay casino product. The resulting rise in value of 888’s shares prompted the family of co-founder Aharon Shaked to sell half their stake in the company in June.