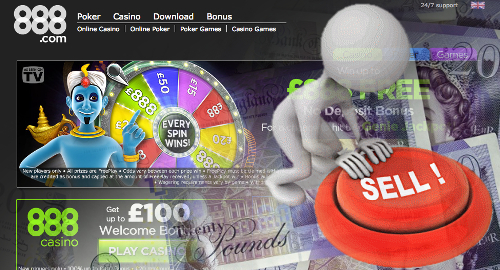 Family members of the late co-founder of online gambling operator 888 Holdings have sold off half their stake in the company.

Israeli media outlet Globes reported that the family of 888 co-founder Aharon Shaked, who left his shares in the company to his family when he died in 2010, had sold 40m shares at £2.70 per share last week, for a total return of £108m.

The sale reduced the 888 stock owned by Aharon’s widow and his two children to 12.9% of the total issued share capital. Shaked’s brother Avi Shaked holds an additional 24.1% of the company.

The share sell-off follows one year after 888’s other co-founders, the Ben-Yitzhak brothers, sold off £57m worth of 888 stock, the largest in a series of share sales that ultimately reduced the brothers’ holdings in the company to below 3%.

888’s name has been bandied about repeatedly as both a potential buyer and an acquisition target in the UK online gambling space’s frantic rush to consolidate. In the latter case, 888 rejected rival William Hill’s £744m acquisition bid reportedly due to Avi Shaked’s belief that the offer undervalued the company.

Whether the Shaked family’s share sale will increase the likelihood of the company becoming an M&A dance partner remains to be seen. As our own Rafi Farber has observed, sometimes a share sale is simply an investor choosing to get paid, nothing more, nothing less. And with 888’s share price roughly half a pound higher than at the time of the Ben-Yitzhak selloff, well, why not sell?

In related news, the Times of Israel recently revealed the existence of an in-house 888 document that cautions employees on how to deal with “overbearing” Israeli staffers. The document warns employees that they might feel that Israeli staffers are “attacking” them because their “tone of voice is louder, [their] facial expressions are more intimidating, [and their] body language is more overbearing.”

The document also warns that Israelis are prone to interrupting other people speaking to them, have a more forthright manner of speaking, are more opinionated (particularly regarding politics and religion), have issues with punctuality and tend to invade other workers’ personal space.

Naama Kushnir, 888’s human resources director in Israel, told the paper that the seven-page guide was “an old document that we basically no longer use. If we would do this type of training today we would change it.”