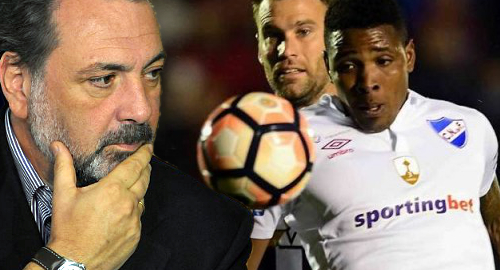 Online sports betting operator Sportingbet is in hot water in Uruguay after a politician objected to the team’s logo appearing on the jersey of a local football institution.

Uruguay keeps a pretty tight lid on its gambling market, with local punters’ legal options limited to a state-run lottery, pari-mutuel race betting and some brick-and-mortar casinos. Sports betting is frowned upon, and online sports betting is downright scowled at in this small nation of only around 3.5m people.

The combination of a small market and a hostile reception hasn’t stopped any number of internationally licensed online gambling sites from serving Uruguyan punters, or even from inking sponsorship opportunities with local sports teams.

The appearance of the Sportingbet logo on Nacional’s jerseys caused a rather large vein to bulge out of the forehead of National Party deputy Jorge Gandini. Brazilian news site 180.com reported that Gandini (pictured) used a local radio show to rant about this flagrant violation of Uruguayan gambling law.

Gandini noted that many Uruguyan sports teams’ jerseys often display online gambling logos when the teams play abroad, but this most recent Nacional game was played in Uruguay, where access to sites such as Sportingbet “is prohibited … according to a principle of legality established since 1895.”

Gandini claimed that he wasn’t blaming Nacional for getting paid, instead lamenting the fact that Uruguay had “no mechanisms that work to control illegal gaming.” In addition to sites like Sportingbet, Gandini claimed there were 30k illegal slot machines scattered across the country over which the government had no control.

Gandini noted that he’d previously complained (with little effect) to the Minister of the Economy about a recent football match against a Brazilian side in Montevideo’s Centenario stadium that featured advertising for Spingol, an online sportsbook licensed in Argentina’s Misiones province.

While Gandini noted that the brouhaha “does not seem to be a thing at first sight very serious,” he nonetheless urged lottery officials to talk to Nacional regarding its promotional activity, saying “the state has an obligation to counter” the efforts of companies like Sportingbet to circumvent local laws, and (more importantly) “to protect gambling companies that charge a lot of money and are installed in Uruguay.”