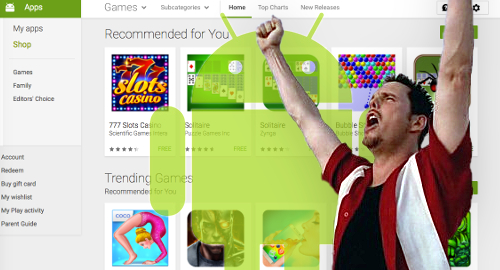 Google’s Android app store is finally relaxing its longstanding ban on gambling and betting apps, according to reports on a UK tech site.

Google’s Android operating system is by far the planet’s dominant mobile platform, but unlike rival Apple’s iOS, the Google Play marketplace had until now wanted nothing to do with real-money gambling, leaving Android users with no option but to download apps direct from gambling sites, which limited the apps’ potential exposure to new customers, as well as developers’ ability to push updates.

On Tuesday, UK-based digital agency Degree53 – whose clients include Betfred, 888 Holdings and OddsChecker – reported that Google had been emailing gambling operators to alert them that they needed to prepare for an imminent seismic shift in Google Play’s gambling policy.

According to Degree53’s Andrew Daniels, Google is informing gaming firms that “beginning of August 2017, Google will accept applications for the distribution of gambling apps within the Play store in the United Kingdom, France and the Republic of Ireland. At a later date, this policy change may be expanded to new regions and countries.“

Daniels said gaming developers will be required to submit documentation supporting their licenses to operate in the jurisdictions in which they wish to make their Android apps available.

Android’s prohibition was the genesis behind the short-lived Betcade, which offered developers a one-stop shop in which to list their Android real-money gambling products. Betcade launched in September 2015 but folded this January after its business model proved unworkable. It’s unclear what role, if any, Betcade’s brief existence may have played in Google’s decision to finally roll back its betting ban.

Google’s restrictive policy showed some sign of budging in 2015, when the company announced a “closed, limited pilot” program permitting real-money daily fantasy sports betting apps in the US Google Play store. Prior to that, DFS apps available via Google Play had been limited to essentially stats-monitoring functionality, while the real-money betting apps could only be obtained via the sites themselves.