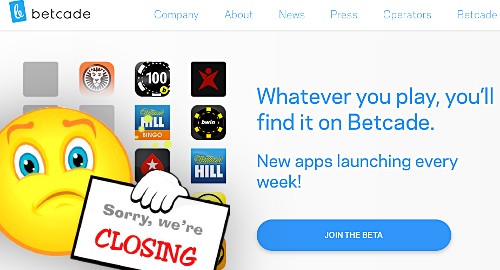 UK-based tech firm Betcade, which launched the first Android-based app store for real-money gambling operators, has announced it is shutting down all operations by the end of January.

In a brief statement issued this week, Betcade founder and CEO David Chang announced that the company was “in the process of closing business operations.” Chang offered no details on what precipitated the closure, saying only that start-ups like his “seek to positively influence the industry which they are in, however this comes with considerable risk as a business.”

Chang thanked the company’s gaming and payment industry partners for believing in his vision of bringing a “revolutionary product” to market but Chang said he’d determined that “the best action for the company was to close the business in an orderly manner and look after our people the best we can.”

Betcade appeared on the scene in September 2015, built around Chang’s observation that there was “no efficient mechanism in place for discovery or distribution” of real-money gambling apps. The company made progress in 2016, including winning the UK Financial Conduct Authority’s approval as an Authorized Payment Institution, and launching its Betcade Pay mobile payment solution for gambling operators just one month ago.

It’s anyone’s guess as to whether Betcade’s business model – which mimicked traditional online gambling affiliate and payment processing deals – proved incapable of sustaining business operations. In November 2015, Chang told CalvinAyre.com’s Rebecca Liggero that he’d been contacted by some of “the largest operators in the world” who “want to be in” Betcade’s online store.