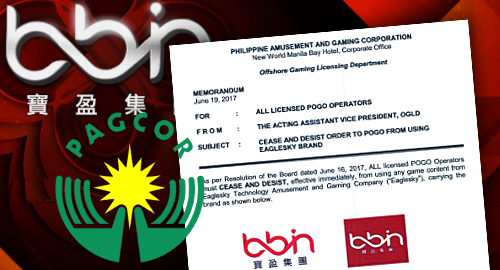 The Philippines’ gaming regulator has issued its first warning regarding an unapproved online gambling technology provider.

The C&D order states that Eaglesky “is not an accredited Service Provider under the POGO Rules and Regulations hence it cannot supply game contents [sic] to POGO Operators.” The order notes that Eaglesky, which is registered in the Philippines’ Clark Special Economic Zone, operates under the BBIN brand.

BBIN is a longtime supplier to the Asian online gambling industry, providing white-label technology to a client list that BBIN claims to top 500 operators in Asia alone. BBIN offers a full spectrum of products including sports betting, lotteries, as well as random number generated and live dealer casino games via both online and mobile channels.

Curiously, BBIN International Limited’s name appears on the most recent update of POGO licensees, which PAGCOR released on Monday. The list contains 39 names, which also doesn’t mesh with a public statement by PAGCOR’s online licensing department earlier this month that the regulator had issued 42 POGO licenses to date.

The POGO regime, which applies to online gambling operators, service providers and player agents, was instituted by PAGCOR last year. The new regime was intended as a means for PAGCOR to exert more control over the Philippine online gambling industry, which had previously been overseen by the country’s various special economic zone authorities.

The POGO system was also intended to boost government revenue, and PAGCOR is currently in the process of selecting a third-party auditor to determine how much revenue its POGO licensees are generating. The results of the audits will not only determine whether PAGCOR chooses to issue more POGO licensees, but will also serve as a benchmark for PAGCOR to potentially revise its online gambling tax regime.