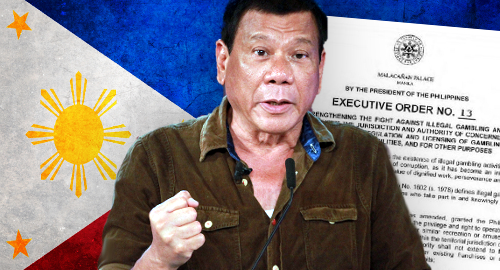 On February 2, Duterte signed Executive Order No. 13, which is intended to beef up the government’s fight against illegal gambling while clarifying the extent of authority for the regulation and licensing of online gambling operations.

The order begins by noting that there are multiple gaming licensing jurisdictions within the Philippines, including the Cagayan Economic Zone Authority (CEZA), the Aurora Pacific Economic Zone and Freeport Authority, the Authority of the Freeport Area of Bataan, as well as the country’s national regulator, the Philippine Amusement and Gaming Corporation (PAGCOR).

The order goes on to note that “confusion with regard to the jurisdiction and scope of authority of the different gaming regulators contributes to the proliferation of illegal gambling and gaming.” The order seeks to ensure that regulators “act within the bounds of their respective mandates.”

GAMBLING WITHIN THE LINES
Section 2 of the order defines illegal gambling, which includes any activity not explicitly authorized by an operator’s licensing authority.

NO BPO W/O POGO
The new territorial limitations pose a significant problem for CEZA, as most of its online gambling licensees base much of their support services outside the economic zone, in urban areas where the technical infrastructure is more robust. Hence the frantic communiqué CEZA issued to its licensees last month, promising millions of dollars in technology upgrades.

Municipal authorities across the country should therefore have no concerns in issuing business permits to the support services of POGO licensees, in keeping with their President’s instructions.

“No duly licensed online gambling operator, or provider of activities and services related to or in support of online gambling activities, shall directly or indirectly allow persons who are physically located outside the territorial jurisdiction of the licensing authority to place bets, or in any way participate, in the games conducted by such operator, whether through an online portal or similar means. Nothing herein, however, shall prohibit the duly licensed online gambling operator from allowing the participation of persons physically located outside Philippine territory.”

The Philippines has long prohibited locally licensed online gambling operators from serving local punters, so the above restriction merely reinforces an existing rule. But while the door to locals may be shut, the window to the rest of the world’s gamblers remains open, whether one holds a POGO license or one issued by the other Philippine gaming jurisdictions.