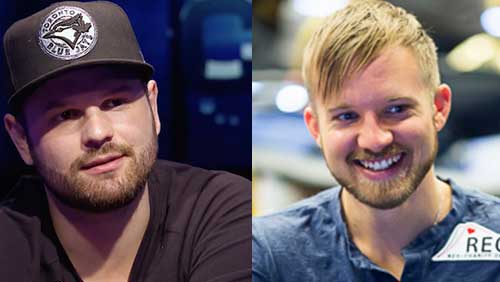 The 2016 World Series of Poker November Niner, Griffin Benger, and 2014 Champion Martin Jacobson have joined the 888Poker team in their latest 8-Team promotion.


It’s time to bust out the Armani suit and those cute pointy shoes you bought in the Moroccan Souk but have never had the balls to wear them. The Wo

rld Series of Poker (WSOP) Main Event is fast approaching, and their primary sponsors 888Poker are cranking up the opportunities to bag a seat.

In the second week of May, 888Poker announced their 8-Team promotion. Five WSOP Main Event online qualifiers would get the opportunity to receive advice from some of the game’s greatest stars in a bid to secure a free seat into the 2018 WSOP Main Event.

The 2014 WSOP Main Event Champion, and Raising For Effective Giving (REG) Ambassador, Martin Jacobson, will saddle next to Sofia Lovgren acting as Wingman for Team Sweden, and that’s where the Wingman news ends. News of Dominik Nitsche and Bruno Politano’s Wingmen will be coming to a computer screen near you, shortly.

The Team Managers and Wingmen will provide their online qualifier with all the advice he or she needs to make a deep run. The player who lasts the longest of the five qualifiers wins an all expenses paid trip to the 2018 WSOP Main Event.

Will Kassouf has already featured at several 888Poker events since his 2016 WSOP Main Event run; let’s see if Benger and Jacobson also extend their relationship with the online poker room beyond this promotion.

Chris Moorman and Sofia Lovgren Appear in The Sun Newspaper

888Poker also launched a WSOP promotion in the controversial British tabloid The Sun this week. And no, I don’t read it, I leave that to my Dad.

The most viewed Page 3 in UK tabloid history ran two exclusives focused on 888Poker Ambassadors Chris Moorman, and Sofia Lovgren, offering readers the opportunity to compete in a freeroll with one guaranteed $12,500 WSOP Main Event package.

And 888Poker isn’t restricting WSOP Main Event access to these two tributaries. Parker “Tonkaaaap” Talbot is currently spearheading Tonkaaaaps WSOP Dream Promotion where players take part in a series of password-protected qualifiers streamed live on his Twitch Channel, and you can also qualify by playing $10 BLAST Sit & Gos on the site.

If you do manage to win the 2017 WSOP Main Event after qualifying online at 888Poker, then the world’s second largest online poker room has promised to bump the prize money up to $10m. Only two previous Main Event winners have ever taken home that much moolah (Jamie Gold 2006) & (Martin Jacobson 2014).

Last year, Fernando Pons qualified for the WSOP Main Event playing in an online satellite on 888Poker and parlayed that into a ninth place finish for $1m, so it’s certainly doable.