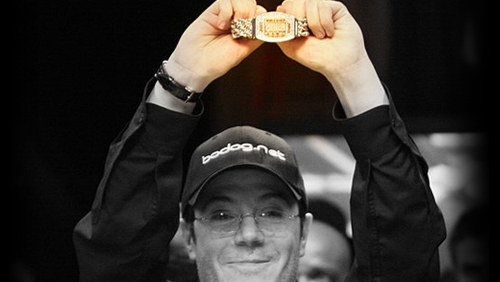 We’re actually surprised that we didn’t find this highly coveted piece of bracelet in an episode of Pawn Stars. Be that as it may, if you fancy yourself owning a piece of World Series of Poker history, Heritage Auctions, the world’s largest collectibles auctioneer, has put Jamie Gold’s 2006 WSOP Main Event bracelet on the auction block.

The bracelet, which will auctioned off at the Sports Signature Auction this coming August in Rosemont, Illinois, is definitely one of the most famous bracelets that have been awarded in the WSOP. That year’s event still holds the record for the biggest tournament prize pool in WSOP history at $82,512,162. With 8,773 players participating, first place money reached a staggering $12 million, a number that still stands to this day as the biggest first place prize outside of the Antonio Esfandiari’s $18 million haul for winning last year’s Big One for One Drop.

But outside of that, Gold’s 2006 WSOP Main Event win was one for the books, earning himself the insane paycheck as well as a bracelet that could find itself a new owner in the next few months.

Speaking of that bracelet, whoever has the financial muscle to win the item on the auction will receive a completely studded piece of bling that includes 259 stones with seven carats of diamonds and over 120 grams of white and yellow gold. In addition to all that diamond and gold, the bracelet also has rubies that were inset to create the red of the heart and diamond suits and sapphire on the spare and three black diamonds on the clubs.

According to Heritage Auctions, the bracelet is classified under “fine” condition.

We don’t know why Jamie Gold is auctioning off his bracelet, but it doesn’t look like he needs the money. Perhaps his well-earned nickname – “The Poker Philantrophist”  – is coming into the forefront again. After all, this is the same man who has helped raise over $175 million for charitable causes worldwide as a host, emcee or donator at 125 events in the last five years.

Knowing this man, we won’t be surprised if the proceeds of this auction doesn’t even find its way into Gold’s pocket.