The King’s Casino is dipping their toes into the jacuzzi like waters of the esports industry after announcing plans to hold a two-day poker event for esports athletes past and present called the King’s Poker Gamers Contest. 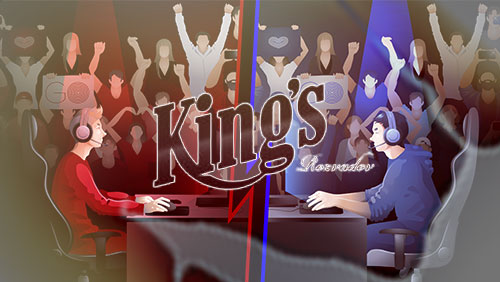 The video game industry is worth $108 billion. The poker industry comes in at $2 billion.

So it’s little wonder that Alex Dreyfus has decided to broaden his horizons to include video gaming in his portfolio by creating the Gaming Player Index.

Dreyfus is leading the way, but others are following.

And now the owner of Europe’s hottest card room, Leon Tsoukernik, is eager to bring the burgeoning sport to Rozvadov with the launch of Kings Poker Gamers Contest.

“After working with the most famous poker tours, I am delighted that King’s Rozvadov has expanded into esports,” Tsoukernik told the press.


The King’s Casino team will host a two-day poker festival where seven of esports biggest European-based stars will battle with ElkY for the right to win a few euros.

The festival begins with an eight-man Sit n Go with €10,000 in prize money up for grabs. Each player has a €250 bounty on their head except ElkY who is worth double that.

Here are the prizes:

The festival ends with a €2/€5 cash game carrying a €500 minimum buy-in. The action takes place over a three-hour stint with the opportunity for fans to play with their favourite esports stars.

Here are the stars:

Both Forsen and SjoW are professional Hearthstone players with Forsen playing for Cloud9 and SjoW playing with Team Liquid. Both djarii and Hotted are amongst the most popular World of Warcraft (WOW) streamers in the business. Dexter is a former League of Legends (LOL) star, PyrionFlax is a Dota 2 streamer, and Onscreen is a former Counter-Strike pro.

It’s not the first time these particular esports stars have battled it out on the dirty green baize of poker. Back in February, Hotted, djarii, Onscreen, and Forsen took part in the Unibet esports Battle Royale IV.

Onscreen earned a £1,000 bounty for eliminating Viktor ‘Isildur’ Blom when his set of fours cracked the aces of the Swede. Onscreen used those chips to significant effect making it to the heads-up stage before Hotted clipped his wings to take the £5,000 first prize.

The play by King’s Casino is another clear indication that some very smart people in poker see our future inextricably linked to the esports business, and that can’t be a bad thing, for an industry that does need a kick in the ass.