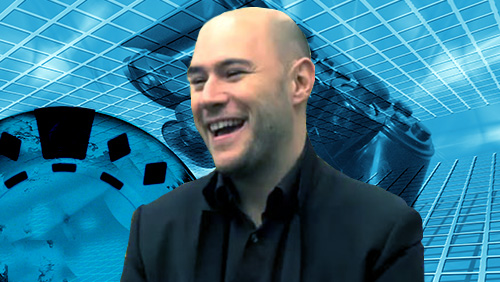 The Hendon Mob and the Global Poker Index have a new pal as Alex Dreyfus looks to broaden his horizons and bring poker closer to the $108 billion video gaming industry by creating the Gaming Player Index.

While shopping for baby toys, I saw a Fisher Price telephone toy. I had one; my son had one – I think everyone in the world has had one. I unpacked it and started pulling it along the floor. The eyes were rolling up and down, and my seven-month-old daughter began to crawl for the first time as she chased it (like a slug) across the floor.

After feeling guilty for teasing her, I gave it to her. She smashed it about a bit. She tasted it. And then I showed her how it works. I dialled an imaginary phone number, put the earpiece to my ear and pretended to talk to someone.

And then it hit me.

Alex Dreyfus delivered one of his tasty morsels of goodness this week. His emails are like Kinder eggs. You get excited because you see the delicious chocolate and know there is a present inside.

You never know what it is, but you know it’s not going to be a Fisher Price telephone.

Dreyfus shared his thoughts on the live tournament scene suggesting that it will not be significantly challenged over the next few years and believes that the market will stagnate in the absence of ‘disruptive’ innovation.

“The same game, the same products, the same distribution paths,” said Dreyfus. If it isn’t broke, don’t fix it.”

We have the World Poker Tour (WPT), the World Series of Poker (WSOP), and the likes of the PokerStars Championships & Festivals, partypoker LIVE, and 888Live.

And while they may improve things slightly, like creating the hybrid online/live MILLION brand, things will ostensibly stay the same as they always have, much like my Fisher Price telephone.

The online poker market is where Dreyfus is going to focus his energy moving forward. But that’s not the present inside the Kinder egg. Instead, sitting inside is a hybrid of online poker and video gaming. As Dreyfus noted in his email, over 37% of people recently polled on The Hendon Mob stated that online poker could be considered as being part of the greater video game industry.

And if that happens, there needs to be a dramatic shift in emphasis.

I recently asked my teenage son if he was excited about the introduction of 3D technology. I was surprised by his answer. He is a big gamer and isn’t interested in 3D because the early games are a single player experience.

“I play games so I can play with my mates,” he told me.

I understand his point. When I played in my weekly home game, it was as much about spending time with my friends than winning money. But that was live poker. You don’t get the same camaraderie playing online.

Dreyfus believes, correctly, that the advancement in video gaming technology is going to become more pervasive. Time is precious. People only have a sparse amount time for entertainment in between Tweeting and Facebooking for hours on end.

As our video games become more immersive and emotional why would we play online poker, which consists of lots of folding, plenty of heartaches, and the odd orgasmic rush?

Rather than wait for the online poker players to bugger off to play more exciting games, Dreyfus wants to keep hold of them. How? He wasn’t willing to bust open the yellow plastic just yet. But he has gotten me excited at his decision to be more disruptive and broaden our foundations


The details are sparse for the time being, but Dreyfus and his team have revealed they will create the Gaming Player Index (GPI), which takes The Hendon Mob and the Global Poker Index (GPI) framework and applies it to the video game industry.

Think: GPI Hearthstone, GPI Counter Strike, GPI League of Legends and you get the picture.

Imagine how many Kinder eggs and Fisher-Price toys you could buy with that kind of money?