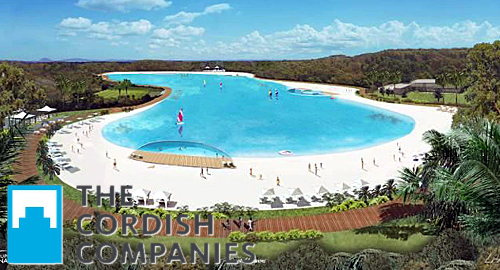 In late March, the regional government in Madrid informed Cordish of their serious doubts that the company’s proposal to build a €2.2b resort casino project on a parcel of land near Barajas airport was “viable from an economic and organizational point of view.” However, the officials told Cordish there was nothing preventing it filing a revised plan.

Last week, Cordish did just that, submitting a plan that adds a six-hectare (15 acres) artificial lagoon and beach to the project’s first phase. The lagoon will allow guests to windsurf, kayak, play beach volleyball and pick sand from their crotches for the rest of the day. Lagoon access would be free for resorts guests, but non-guests could access the water for a fee.

Part of the reason why the initial proposal was rejected was the lack of sports and cultural facilities included in the first phase of development. Those facilities are necessary for the project to be designated an Integrated Development Center (CID), a status that confers both tax advantages and flexibility in land usage.

Cordish says it plans to spend €587m on the first phase of project, which would operate under the name Live Resorts Madrid. Additional phases would bring the project’s total cost up to €2.2b, but Cordish claims it’s willing to spend up to €3b if, as the company forecasts, 1.6m tourists descend on the project like locusts every year.

Cordish insisted that it won’t require any government subsidies to complete the project, and that it is fully capable of funding the first phase on its own. Cordish’s pitch included letters from M&T Bank and Credit Suisse attesting to their financial support for the project’s later phases.

The addition of the lagoon boosts the project’s expected footprint to 92 hectares, of which around 11k-square-meters would be devoted to gaming. The company envisions a gaming floor consisting of 100 gaming tables, 30 poker tables, up to 1,500 slot machines plus a sports betting lounge.

Madrid officials have one month in which to study the plan’s 7k pages for signs of increased viability. Cordish CEO Joe Weinberg said in the documents that the company doesn’t see “any rational reason why the project would be rejected.”