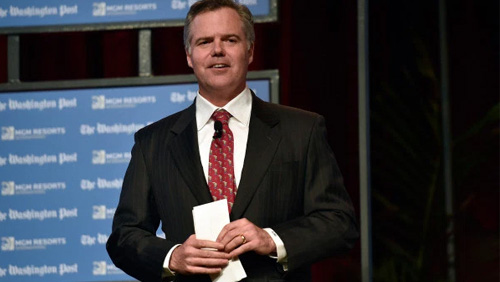 James Murren, chairman and chief executive of the casino group, received a total of $16.6 million last year, up from the $13.3 million he received in 2015, MGM Resorts reported in a proxy filing

to the U.S. Securities and Exchange Commission.

For 2016, MGM Resorts set a target of adjusted earnings before interest, taxes, depreciation and amortization of $2.14 billion. Actual EBITDA came in 8 percent higher, triggering a bonus that was 41.3 percent higher than planned, according to the company.

Murren’s 2016 base salary was kept at the 2015 level of $2 million, but the MGM Resorts chief stock awards—consisting of restricted stock and performance-linked shares—rose 19 percent year-on-year to reach $7.44 million. Murren also received $1.52 million in “other compensation,” including $250,000 for personal use of aircraft and $391,814 for personal security services.

MGM Resorts said the cost of Murren’s personal security services was “within a competitive range based on cost of such services for the chief executive officers of the three other major Las Vegas based gaming/resort companies (Las Vegas Sands [Corp], Wynn Resorts [Ltd], and Caesars Entertainment [Corp]).”

Murren has been chairman and CEO since December 2008. In October, he signed a new, five-year contract with MGM that grants him, among other things, $2 million of restricted stock units that he will gain when the contract terminates at the end of 2021. The signing bonus was not part of the $16.6 million in compensation, according to the casino company.

Murren has been at the helm of MGM’s Resorts’ expansion in Asia. The casino group, which has a 56 percent stake in Macau’s MGM China Holdings Ltd., recently expressed a willingness to invest up to $10 billion to open an integrated resort in Japan.

The second-highest pay package in MGM Resorts went to Robert Baldwin, the group’s chief customer development officer. Baldwin’s package reached over $7.02 million, up 7 percent from the approximately $6.56 million he received in 2015.