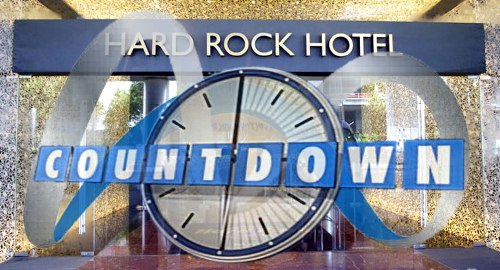 MRE, which officially ditched its old Melco Crown Entertainment name on Wednesday, has decided that the Hard Rock Hotel at MRE’s City of Dreams resort in Macau will operate under the name The Countdown starting in July 2017.

However, The Countdown is only a placeholder, as the hotel’s official new name won’t be revealed until April 1, 2018. In keeping with this somewhat bizarre temporary branding plan, the hotel will feature a countdown clock ticking away the seconds until the real name is unveiled, which strikes us as the longest set-up for an April Fool’s joke ever, but so be it.

The countdown clock will also tick down to the opening of Morpheus, a new luxury hotel attached to City of Dreams. Designed by the late Dame Zaha Hadid, Morpheus will include restaurants, retail space and a new gaming area.

MRE CEO Lawrence Ho said the company was “counting down to the best ever City of Dreams,” which will redefine “what a modern integrated resort has to offer.”

The MelcoLot lottery technology business, in which Melco Int’l holds a 40.65% stake, saw tepid revenue growth of 5.6% in 2016 thanks in part to China’s ongoing suspension of online lottery sales. MelcoLot expects continued challenges in the short-term but believes the company is well-positioned to take advantage of the promised new online lottery regulatory regime, if/when it ever arrives.

The Melco-controlled Entertainment Gaming Asia lost $5.3m last year after a wholesale restructuring that included the sale of its Dolphin Products chip-making business and its Cambodian slots operations, leaving it with just 411 slots positions in Philippine gaming halls. The company is still beta-testing its new Asian-facing social casino app, which it’s calling City of Games.

Last November, a consortium consisting of Melco International, US gaming operator Hard Rock International and property developer Cyprus Phasouri (Zakaki) Ltd, was awarded the lone casino license in the Republic of Cyprus. Melco says it’s now entered the “final stage” of obtaining its 30-year license – with exclusivity guaranteed for the first 15 years – from the Cypriot government.