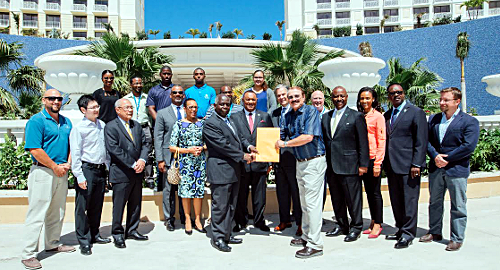 The Baha Mar resort casino project in the Bahamas has been officially handed over to its new owner but the property has yet to receive a gaming license just one month before its scheduled soft opening.

The transfer came four months after CTFE confirmed that it was the new owner of the unfinished $4.2b Baha Mar project, after working out a deal with the Chinese bankers who foreclosed on original owner Sarkis Izmirlian following the property’s 2015 bankruptcy filing.

The certificate transfer allows Baha Mar to accept reservations for guests at the Grand Hyatt hotel – the first of three hotels set to open on the property – and CTFE Bahamas president Graeme Davis told local media that the property would begin booking guests “very, very soon” following the launch of a major marketing campaign.

Baha Mar has set an April 21 target for the first phase of its soft opening, and Davis suggested that the property would welcome non-paying guests on its first day in order to work out the kinks. In addition to the hotel and casino, Baha Mar’s golf course, restaurants, bars and convention center will also be open on April 21.

Baha Mar recently announced the hiring of its casino management team but the property has yet to receive its gaming license. Davis insisted that the licensing process was “well underway” and “we don’t expect any concerns.” Sky Warrior (Bahamas) Ltd is the CTFE subsidiary that will run Baha Mar’s gaming operations, which will be the largest in the Caribbean.

Tourism Minister Obie Wilchcombe said the Bahamas Gaming Board would hold a public hearing on Baha Mar’s gaming license on March 31 and a favorable recommendation was expected to follow shortly thereafter. Baha Mar is currently reinstalling the gaming equipment that was put in place by the original developer but was removed following the bankruptcy filing, and training is already underway for the casino floor staff.

Prime Minister Perry Christie used the certificate transfer ceremony to chastise Baha Mar’s critics “who are rooting against the success of this project for political purposes. They would be best advised not to do so and to feel terrible about doing so.”