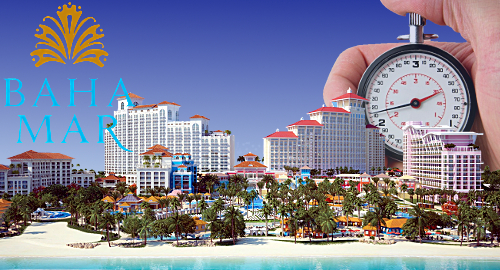 It’s anyone guess if the troubled Baha Mar resort casino in the Bahamas will make its latest scheduled opening date, but they continue to assemble the necessary team just in case.

Until recently, Pariente was chief gaming officer for Hard Rock International’s Punta Cana resort in the Dominican Republic and before that worked at Wynn Encore in Las Vegas. Zaremba was VP of gaming operations at the Cosmopolitan in Las Vegas and has also done stints at Las Vegas Sands’ Nevada properties.

Baha Mar’s first casino employees reportedly began their training regimen this weekend. The 100k-square-foot casino floor plans to boast 1,100 slot machines and 125 gaming tables when it opens to the public. Note: we said ‘plans to’.

The Bahamian subsidiary of Hong Kong conglomerate Chow Tai Fook Enterprises (CTFE) announced earlier this year that they would begin a phased opening of the resort on April 21. But despite that deadline being just five weeks away, the resort has yet to begin taking reservations, prompting fears of yet another postponement.

This weekend, Baha Mar President Graeme Davis told a local radio program that the property’s operators wanted to “make sure we open up thoughtfully, to make sure that we are creating an exceptional experience that we don’t have that mishap that happened in the past where it was a start-stop where guests had their reservations cancelled.”

Baha Mar was originally scheduled to open in 2014 but the completion date kept getting further away until original developer Sarkis Izmirlian put the project into Chapter 11 bankruptcy in June 2015. Last December, CTFE announced that it had acquired the property from the Chinese bankers that foreclosed on Izmirlian.

However, CTFE subsequently announced that the deal wouldn’t be finalized until the property’s principal contractor, China Construction America (CCA), finished work on the project, which was said to be 97% complete when Izmirlian filed for Chapter 11.

Izmirlian, who had very publicly blamed CCA’s slow progress for most of the project’s setbacks, issued a press release earlier this month calling Baha Mar “a Potemkin hotel,” and claimed Bahamians “do not really know if there is a final ownership deal firmly in place.” Izmirlian repeated his oft-stated offer to “buy Baha Mar today and complete it immediately with Bahamian workers and Bahamian contractors.”

More bad news came on February 28, when Rosewood Hotels and Resorts International announced that its 200-room Baha Mar hotel would open “in Spring 2018.” In January, Baha Mar’s Davis had claimed both Rosewood’s hotel and the SLS Lux hotel would be accepting visitors in time for Baha Mar’s ‘grand opening’ in November/December 2017.

Rosewood, which is a subsidiary of CTFE, bailed on Baha Mar shortly after the 2015 bankruptcy, and only returned to the project after CTFE announced its involvement. Nonetheless, Rosewood’s announcement has given more credence to rumors that CCA has fallen behind on its construction schedule. Watch this space.