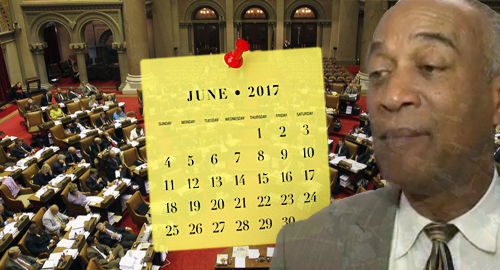 New York’s state Senate included online poker language in its budget proposal last week, but the Assembly opted not to include poker in its spending plan. According to Assemblyman Gary Pretlow, the exclusion was due to unidentified powerful figures in the Assembly who remain on the fence regarding online poker’s merits.

Pretlow (pictured), who introduced an online poker bill in the Assembly in February and who later claimed he didn’t see “too much opposition” to passing online poker legislation this year, told Online Poker Report that there were “people opposed to [poker] who are higher than me and don’t want it in the budget. They want to do it separately and want to look at it more fully.”

Pretlow chairs the Assembly Racing, Wagering and Gaming Committee – one of four committees that his poker bill will have to successfully navigate to make it to the Assembly floor for a vote – but Pretlow indicated that he intended to keep his poker powder dry until after (a) legislators wrestle the budget question into submission and (b) “the people opposing [poker] at higher levels than me come to see my point of view.”

The current legislative session ends on June 21 and Pretlow cautioned that two-thirds of the state’s bills traditionally end up waiting until June to come up for serious discussion. Meaning everyone can safely drop the popcorn GIFs for the time being.

Enacting online poker legislation will require getting around the state’s constitution, which prohibits wagering on unauthorized games of chance. Pretlow views live poker as a skill game, but says the inability to read an opponent’s facial expression or other ‘tells’ in the online game is “a question people have of me that I have yet to answer. We’ll probably overcome it, but it’s a battle.”