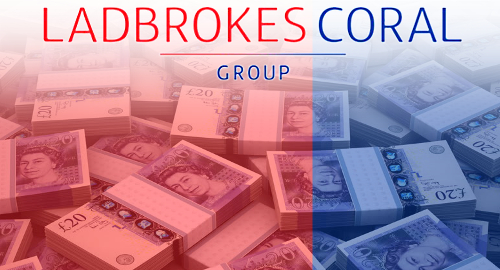 The forecast is in line with market expectations, despite the poor sporting results in the second half of December that rival William Hill used to explain its third profit warning in 12 months. (And Hills’ FY16 forecast of £260m means that it’s now less profitable than Ladbrokes Coral.) Ladbrokes Coral will issue initial FY16 results next month, with the final audited figures arriving March 28.

Ladbrokes Coral’s Q4 digital revenue was up 18% over the same period in 2015, with Ladbrokes.com up 17% and Coral.co.uk gaining 13%, despite sports margins falling a full point from Q4 2015. In Australia, Ladbrokes reported revenue rising 45% thanks to a 57% rise in betting stakes.

UK retail operations reported revenue rising 4% in Q4, despite OTC revenue falling 11% from Q4 2015. The decline was a double-whammy, with OTC wagering stakes falling 5% year-on-year and sports margins down two points. On the plus side, the company recorded 140k multi-channel signups during the quarter.

Ladbrokes Coral CEO Jim Mullen celebrated the results, which he said came even though “the sporting gods did not look favorably on us.” Mullen said the results were all the more impressive given that Q4 was a period of “significant activity with the completion of the merger … along with the necessary shop disposals.”

On the whole, Mullen said the merged entity was off to “an encouraging start” and that “good progress is being made on all the key integration workstreams.” Mullen said the company “remain confident in our plans for 2017 and on delivering the opportunities identified in the merger.”