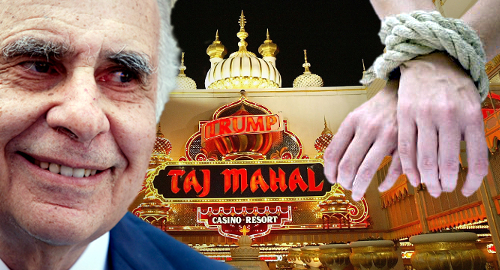 Billionaire Carl Icahn has slapped a deed restriction on his shuttered Trump Taj Mahal casino in Atlantic City that would prevent future owners from operating gaming on the premises.

The filing was made on December 22, one day after the New York Post reported that Icahn was looking to sell the Taj. However, Icahn also filed papers with the Atlantic County Clerk’s office on December 19 that slapped a deed restriction on the Taj which would prohibit future owners from operating gaming on its premises, unless the new owner pays Icahn an unspecified fee.

While deed restrictions aren’t new to AC, Icahn’s condition resembles a ‘from hell’s heart, I stab at thee’ retort to the New Jersey legislature, which approved a bill in late December that would impose a five-year gaming license suspension on any casino owner who closed an AC casino after January 2016. Gov. Chris Christie has yet to indicate whether he’ll sign the bill, which passed both legislative chambers by veto-proof margins.

Developer Bart Blatstein, who purchased the Showboat in 2015, later worked out a deal with Icahn to drop the 1988 restriction. Blatstein denied having to pay Icahn to lift the restriction, saying the agreement involved only “minor considerations.”

Representatives of the Local 54 of the Unite-HERE union, which had sparred with Icahn after the billionaire convinced a court to scrap the unionized workers’ wage and benefit guarantees, had warned that Icahn planned to reopen the Taj this spring with a completely non-union workforce. Icahn had insisted that he saw “no path to profitability” for the Taj without unionized workers making further concessions.

Final figures for 2016 won’t be released until later this month, but AC’s remaining seven casinos have been reporting small monthly gaming revenue gains this year, with year-to-date brick-and-mortar gaming revenue up 1.2% to $2.09b through November, provided you discount the contributions from the Taj Mahal.