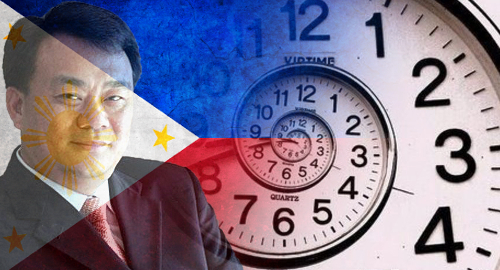 Lam, whose Fontana Casino in the Clark Freeport and the Fort Ilocandia casino in Laoag City were recently shut down following Lam being hit with bribery and economic sabotage charges, had a ‘perpetual license to operate’ from the Philippine Amusement and Gaming Corporation (PAGCOR).

During her meeting with Lam, Domingo said she pointed out that Lam’s casino operations were paying only 1% tax on their gaming revenue, while other PAGCOR-licensed operators were paying 10%.

On Thursday, Domingo said Lam had argued that he only receives 10% of the revenue derived from junket operators bringing VIP gamblers to his casinos, and thus 10% of 10% is 1%, making his payments to PAGCOR legit. Domingo insisted that “10% of junket operations should go to PAGCOR.” (Lam is the founder of the Jimei Group, one of Macau’s largest junket groups.)

Lam has claimed that the Philippine Supreme Court has already upheld the validity of his favorable casino license terms, but ABS-CBN News quoted Domingo saying the Court had ruled only on the manner of revocation of Lam’s license, not on the lower tax rate nor the automatic renewals of his license.

Domingo said she’d directed PAGCOR lawyers to renegotiate Lam’s deal but that there was no guarantee that Lam would be issued a new license, given the fact that his online operations were deemed to be illegal. Lam’s attorney had claimed the online operations were approved by the Cagayan Economic Zone Authority (CEZA) but the Authority later denied approving anything of the sort.

Lam fled the Philippines late last month, just days before Philippine President Rodrigo Duterte ordered his arrest. Lam has been linked to Wally Sombrero, a former police superintendent and self-proclaimed liaison between gaming and political figures, who was caught on video handing immigration officials $1m in cash, allegedly to obtain the release of Chinese workers arrested for illegally working at Lam’s online operations.

The two immigration officials – Al Argosino and Michael Robles – claim they were conducting a sting operation intended to expose Lam’s bribery, while Sombrero has accused them of attempting to extort Lam. On Thursday, Sombrero’s attorney told reporters the sting claim was laughable, noting that the two officials only came forward once a local journalist outed them as having accepted the cash.

Argosino and Robles have been suspended from their posts pending an investigation. Argosino gave a radio interview on Thursday in which he claimed the pair “are now in hiding because what we bumped into is no small syndicate. We just hope to be given protection.” Immigration intelligence officer Charles Calima, who Argosino and Robles claim shook them down for nearly one-fifth of the bribe/extortion money, has also been suspended.