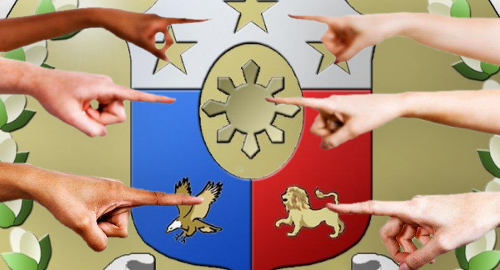 Monday brought word that the Department of Justice had video evidence of Lam’s intermediary, former police superintendent Wally Sombrero, giving P50m (US $1m) to two BI commissioners, Al Argosino and Michael Robles, allegedly to obtain the release of 600 of the 1,316 Chinese workers arrested on November 24 at Lam’s Fontana Casino in the Clark Freeport.

Sombrero, who is under the NBI’s protective custody, has denied bribing anyone, and claimed that the BI officials in the video were the instigators of an extortion plot.

NO, WE’RE THE GOOD GUYS
Tuesday saw Argosino and Robles release a statement saying they were being framed and that the filmed cash exchange was actually part of “a continuing investigation about employment of illegal aliens and illegal gambling operation, as well as on how their existence during the past administration would thrive through illegal payoffs.”

Argosino and Robles say they were approached by Sombrero shortly after his November 26 meeting between Lam and Aguirre, at which Aguirre claims Sombrero offered him a bribe to act as ‘godfather’ to Lam’s local gaming operations. Argosino was also at this meeting.

The BI officials said Sombrero privately restated his need to find a “sponsor” who could help Lam’s online gambling business obtain a new POGO license from the Philippine Amusement and Gaming Corporation (PAGCOR).

The BI officials claim that when Sombrero handed over the P50m cash – P2m of which they claim Sombrero kept as his fee – he told them the money came from gaming operators and not from Lam. (Lam’s online gambling operations were sub-contracted to Chinese firm Next Games Outsourcing Inc.)

The BI officials concluded that there wasn’t enough evidence to directly link Lam to the bribe attempt, which is why they didn’t immediately hand over their share or alert anyone else at the BI as to the existence of their investigation.

At a press conference in which Argosino and Robles posed with their filthy lucre, Argosino pointed out that the pair “could have run away. We could have made our early retirement when the minimum wage was less than P10k a month.”

SCREW IT, EVERYONE’S GUILTY
Argosino and Robles also accused BI Intelligence chief Charles Calima Jr. of acting “in conspiracy” with Sombrero and that the intelligence boss had been “constantly monitoring the whole incident from its inception all the way to its end.”

Following their meeting with Sombrero, Calima allegedly approached Argosino and Robles to inform them that Sombrero had made an audio recording of their conversation during the payoff. Calima reportedly played the audio of the meeting on his laptop during a meeting with Argosino, Robles and BI Commissioner Jamie Morente.

Following the meeting, Argosino says he met Calima at a mall, where Calima offered his help to extricate the pair from the kerfuffle, for the low, low cost of P18m of the P48m in their possession.

Argosino claims that the P18m was to be split between Calima, Sombrero, Morente, a certain Col. Ed Chan and Inquirer journalist Ramon Tulfo, who first broke the story of Argosino and Robles’ alleged extortion attempt.

Argosino and Robles have filed a corruption complaint against Lam, Sombrero, Calima and the two Chinese interpreters who were at Lam’s meeting with Aguirre.

Lam fled the Philippines days before President Rodrigo Duterte ordered his arrest for bribery and economic sabotage. Lam’s online gambling business, his Fontana Casino and another casino in Laoag City have all been closed but Duterte has indicated that Lam could resume his gaming operations provided he make back tax amends and agree to pay proper taxes on future gaming revenue.