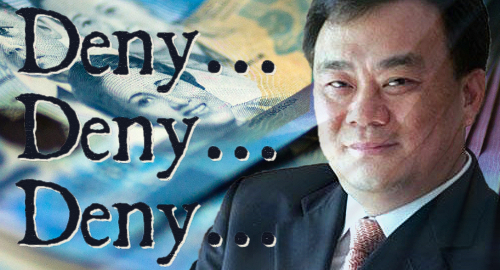 Casino and junket operator Jack Lam has denied attempting to bribe high-ranking Philippine officials to protect his gaming interests, but the nation’s top law enforcement official is sticking to his story.

Earlier this week, Justice Secretary Vitaliano Aguirre II accused Lam of offering bribes to both Aguirre and the head of the Philippine Amusement and Gaming Corp (PAGCOR) to protect Lam’s gaming operations and to secure the release of the 1,316 Chinese nationals arrested last week for illegally working at an online gambling operation at Lam’s Fontana Casino in the Clark Freeport.

On Friday, Lam (pictured) issued a statement through his attorney Raymond Fortun, which said Lam “has no reason to bribe anyone” since his gaming operations have obtained all “necessary permits and licenses.” Lam also “categorically denies” offering bribes for the release of the arrested Chinese nationals.

Aguirre had earlier claimed that former police superintendent Wally Sombrero attended a meeting between Aguirre and Lam at which Sombrero suggested Aguirre would be an ideal ‘godfather’ to protect Lam’s gambling operations.

Fortun claimed that Lam “has not authorized” Sombrero to “make any bribe offers” to Aguirre and that whatever Sombrero discussed with Aguirre “was a matter between the two of them.”

Sombrero was reportedly in the room because Lam speaks neither English nor Filipino. Fortun claimed that “at no time did Lam have the opportunity to speak directly” with Aguirre and that the two interpreters Lam brought to the meeting also didn’t say a word “as Mr. Lam did not say anything.”

As for Lam’s alleged bribe offer to PAGCOR chair Andrea Domingo, Fortun said Lam “has not authorized anyone to talk with” Domingo and that Lam’s discussion with Domingo (via an interpreter) was only to explain “his side of doing legitimate business.”

AGUIRRE DISPUTES LAM’S ASSERTIONS
Aguirre was quick to push back against Lam’s denial, saying Lam “must have heard Sombrero asking me” to be Lam’s godfather, as the overture “was not done in whispers.” Aguirre also wondered why, if Lam was so in the dark as to what Sombrero was pitching, didn’t Lam react to Sombrero’s offer during the meeting. “Why the very belated reaction?”

On Thursday, Aguirre suggested he lacked sufficient evidence to bring bribery charges against either Lam or Sombrero. But he urged other government agencies to investigate Lam’s gambling operations for avoiding paying tax on their earnings.

ANG(ST) OVER MIDDLE MAN
Fortun claimed Lam had only met Sombrero the day before their meeting with Aguirre, and that Sombrero had been referred by a mutual acquaintance. Fortun appeared to throw Sombrero under the bus, claiming that “whatever was added” by Sombrero to the discussion with Aguirre, “Jack Lam has nothing to do with it.”

The Inquirer suggested that the intermediary who introduced Lam to Sombrero was Atong Ang, who is said to run Meridien Vista Gaming Corp, which operates online jai alai gambling in the Philippines. Ang is also reportedly partners with Lam in a junket business that serves a Manila casino. Lam founded the Jimei Group junket, which has a presence at Melco Crown’s City of Dreams Manila.

Fortun said he had “no personal knowledge” of any connection between Sombrero and Ang, but if there was a connection “it would have been a long, long time ago.”