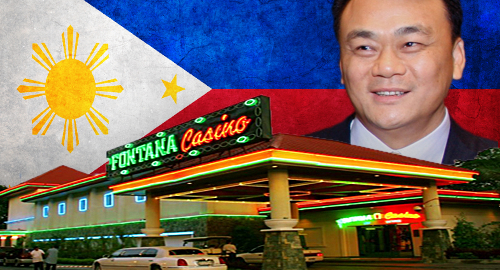 Casino and junket operator Jack Lam likely won’t face charges for attempting to bribe Philippine officials, but he’ll be made to pay in other ways.

On Wednesday, Justice Secretary Vitaliano Aguirre II publicly accused Lam (pictured), founder of the Jimei Group junket and operator of the Fontana Casino in the Clark Freeport Zone, of offering Aguirre a bribe to release the 1,316 Chinese nationals arrested last week for illegally working at an unauthorized online gambling operation on the Fontana property.

On Thursday, Aguirre told reporters that he didn’t plan to pursue bribery charges against Lam or retired police superintendent Wally Sombrero, through whom Lam’s alleged bribe was made. Aguirre had claimed that Sombrero asked if Aguirre would act as Lam’s ‘godfather’ to protect his online gambling operations.

Aguirre clarified that neither Sombrero nor Lam had actually offered him cash in exchange for becoming a godfather, and thus it wasn’t clear the offer/request met the legal standard of an “overt act of bribery.” Aguirre also noted that Lam speaks neither English nor Filipino, so it would be hard to prove he understood what Sombrero was saying.

THE TAXMAN COMETH
Lam may have dodged the bribery brouhaha, but Aguirre confirmed that Lam had never received authorization from either the Philippine Amusement and Gaming Corp (PAGCOR) to launch online gambling services at the Fontana casino.

Aguirre has therefore asked the Department of Tourism and government officials in Pampanga to file criminal charges against Lam to collect the “billions of pesos” in unpaid taxes and fees on Lam’s online gambling operations.

Last year, a Manila Times op-ed accused Lam of issuing “sub-licenses” to other Chinese-facing online operators. On Thursday, Aguirre said the operators at the heart of the Chinese worker arrests were only renting space at Fontana. However, Aguirre suggested Lam may yet be liable if it can be proven that Lam controls these operations through ‘dummies.’

PAGCOR chair Andrea Domingo said she “cannot contradict” Aguirre’s claims that she rejected Lam’s offer of a 1% cut of his casino earnings to permit his online operations to continue. But she said would require Lam to pay the government 10% of his casino take instead of the 1% he currently pays “based [on] a vague provision in his contract with PAGCOR made many, many years ago.”

CHINESE DETAINEES MAKE THEIR GREAT ESCAPE
Aguirre said he wouldn’t be surprised to learn that the wealthy Lam has “very powerful people in his pocket from regulators to enforcers.” For that reason, Aguirre said he kept National Bureau of Investigation and Philippine National Police officials in the dark ahead of last week’s raids on the Fontana.

Some 57 arrested workers escaped their temporary detention facility in the Clark Freeport by hopping a fence at 3am on Thursday. Most of these escapees have since been recaptured, although 27 remain on the lam. The Manila Times later quoted a Bureau of Immigration (BI) source saying the 57 workers “were allowed to escape.”

Aguirre said he’d tasked the BI with investigating how the escape was allowed to happen, and vowed that “heads will roll” if it can be proven that BI officials aided the escape in any way. Aguirre had previously stated that Lam had offered BI officials P200k ($4k) for each worker’s release.