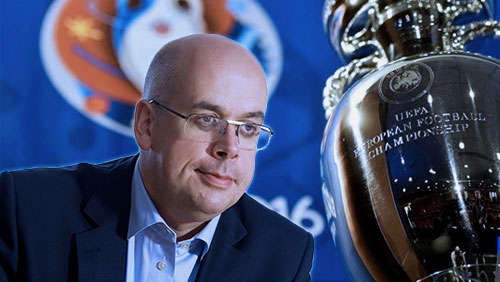 The possibility that the Roy Hodgson’s 23-man England squad upsetting all football teams in the Euro Cup is causing Ladbrokes Plc boss Jim Mullen a lot of sleepless nights.

Mullen admitted that England’s glory in the Euro 2016 tournament, which will run from June 10 to July 10 in cities across France, would be the biggest single risk to Ladbrokes Plc’s profit this year since it stands to lose £1 million ($1.4 million) for every game the team wins in the opening half of the tournament.

He even considered England’s win as a more pressing concern for June than the on-going merger discussions with rival betting company, Gala Coral Group.

The Ladbrokes CEO hopes that England will not be the last team standing on July 6 or it will mean more losses for the British bookmaker, which already lost £6 million (US$8.7 million) on March’s Cheltenham horse racing festival and £3 million (US$4.37 million) on Leicester City winning the Premier League.

“If England wins the tournament, it will be really, really bad for the firm,” Mullen told Bloomberg.

France is the most favored team to win in this year’s Euro Cup, despite not lifting a major trophy since Euro 2000 in Holland and Belgium. Didier Dechamp’s squad, will heavily rely on the likes of Antoine Griezmann, Anthony Martial and Kingsley Coman for goals and prolific midfielders Paul Pogba and N’Golo Kante.

The French squad leads the betting at Ladbrokes with 10/3 odds of winning the tournament while WilliamHill had France winning this year’s cup with 3/1 betting odds.

England, which will play a maximum of seven games at the tournament and face Russia in their Euro 2016 opener in Marseille, has only been predicted to reach the semi-finals. World Cup veteran striker and Manchester United captain Wayne Rooney will lead the youthful, Three Lions squad in its 2016 football campaign.

Ladbrokes put England at 17/2 betting odds while William Hill placed them at 8/1 odds.

“For the first half of the tournament we could be significantly in the red,” Mullen said. “Then in the second half, when it comes down to the big eight teams, it gets tougher, and that’s when I try to get my money back. But it’s extremely nerve-racking.”