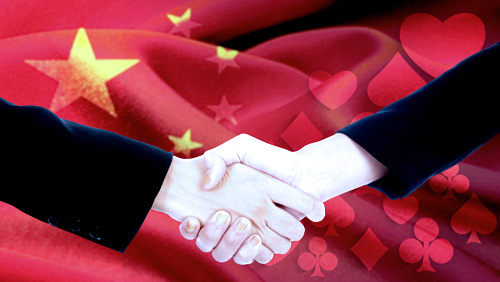 The Global Poker League will increase its visibility in the Chinese market after inking a long-term strategic partnership with the online sports platform Sina Sports.

Followers of Alex Dreyfus will remember that he used to have the Great Wall of China as his Facebook profile picture.

Now we know what he was doing there.

Sina Sports will become the “Official Digital Media Partner of GPL” in China, and the pair will work together to ensure the Chinese audience will receive ‘comprehensive localized coverage,’ including exclusive access to GPL players, and streaming of over 400 hours of GPL games and events.

The new Chinese audience will consume content via Sina Sports dedicated ‘poker’ channel, and the GPL coverage will be their jewel in the crown. Dreyfus also announced in the press release that the GPL is also ‘partly’ backed by the Beijing-based VC firm Ceyuan Venture and Hong Kong-based Head and Shoulders Capital.

Sina Sports is the number one sports destination in China with 15 million web users and 26 million mobile users daily. Sina.com is also the fourth most popular website in China according to Alexa Rankings.

Sina Sports General Manager and Senior Vice President, Arthur Wei, gave Dreyfus and his team a huge vote of confidence when he stated: “I believe that Sina Sports will be looked at for years to come as a visionary media company for having brought GPL into China.”

The GPL Will Grow

So now you understand why Hong Kong Stars Team Manager, Celina Lin, was so hellbent on drafting local stars into her set up. But there’s, even more, Asian team news on the horizon.

Not only is Dreyfus expanding the visibility of the GPL, but there are also plans to increase the size of it. The press release stated that the GPL intends to work in close collaboration with Sina Sports to ensure the product is right for the Chinese market, including ‘establishing at least one new franchise in Mainland China for the 2017 season’ expected to be Beijing.

It’s the second news story in a week concerning westernised poker structures developing in the most populous Eastern nations after the World Poker Tour (WPT) inked a deal with India’s online poker network Adda52. The WPT also has an interest in China as they are owned by the Chinese online gaming outfit Ourgame International Holdings, and am I the only one wondering why the former World Series of Poker (WSOP) Main Event champion, Martin Jacobson, was doing in China promoting Tencent Poker?

The GPL is Not a Gambling League; It’s an eSports League

Although slightly alien to most of us, it’s important to start understanding that the GPL is not a ‘gambling league’ and instead is an ‘eSports league.’

“The GPL secured a deal with USA Today, and now China’s largest digital media company,” Dreyfus told me earlier today. “We aren’t an online gambling company. We are running away from a 15-year old model as fast as we can. Our goal is to think differently and focus on the poker fans and not the gamblers. We are interested in the audience that wants to consume content and follow the action, and yes, play for no money.

“Both the GPL and Sina Sports are eager to give China what they want, and that’s a new sport for them to follow passionately. The GPL is a sport. The GPL is new. The likes of Xuan Liu, Maria Ho, Celina Lin, and Martin Jacobson are our stars. The Chinese audience will become their fans.

“We are a spectator sport, creating content and products that increase the engagement of our fans. We need new business models that will appeal to a market of over a billion people, and help grow a new generation of players within the GPL experience.”

Something tells me we are about to experience a new poker boom, and it’s going to have an Eastern flavour.