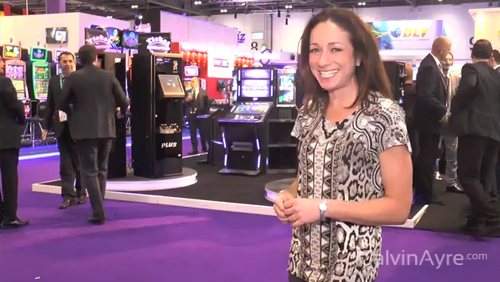 ICE Totally Gaming 2016 has officially begun and the first day of this massive event was a success. One of the many things Clarion got right was simplifying entry into the event, making it a breeze to walk through the door so long as delegates accepted the responsibility of printing their passes in advance.

Once inside, the usual buzz of exhibit hall booths, promos, models, music, giveaways, camera crews, meetings, drinks and other activities was impressive. Today the CalvinAyre.com crew spent most of our time checking out the best booth displays, reveals and brand ambassador appearances on the expo floor. While this was all going on, a selection of conferences and sessions also took place, catering to the hottest topics and different facets of the global gambling industry.

First on our list of booths to check out was Playtech and their 2016 display was the biggest and best yet with massive screens, product displays and a fully equipped conference room.

Across the three days of ICE, Playtech’s booth is featuring 15 free-to-attend “TED” style presentations delivered by internal experts talking on subjects near and dear to the hearts of their customers (and other industry professionals). Branded as “Playtech Academy”, Playtech’s Luke Davis told CalvinAyre.com an initiative of his organization is to ensure their operators are performing at their best, hence this type of support from their supplier.

Davis also explained the importance of an Omni-Channel gaming experience and explained how the  “Playtech ONE” system delivers a seamless experience across any product on any device using one account.

Over at the CORE Gaming booth, we spoke with CEO Justin Chamberlain who talked on the MotoGP virtual sports game his organization is developing. The product will utilise the CORE HTML5 framework and WebGL 3D browser technology and Sam Lowes, a MotoGP British rider champion, will serve as a CORE Gaming brand ambassador until 2017.

Lowes made an appearance today at ICE and was available for photos and interviews in front of a flashy motorcycle and elaborated on how he will use his social network and MotoGP appearances to help promote the new virtual game.

Another famous face today at ICE was English Footballer Michael Owen, brand ambassador of Colossus Bets. Colossus Bets CEO Bernard Marantelli told CalvinAyre.com he decided to exhibit for the first time at ICE this year as he wants to show the industry how big his business has become and said it’s still growing.

Marantelli recently announced a Colossus Bets partnership with two Nigerian-facing iGaming operators and promised more coming down the pipeline. The partial cash-out slot Marantelli revealed in September of 2015 has also been a success for SkyBet and the second cash-out slot designed for William Hill was revealed and on display at ICE 2016.

To have a little fun and attract some foot traffic on the expo floor, the Colossus Bets team arranged a “media shoot-out” in front of a goal at the booth with Owen, featuring Clarke Beecroft from EGR, Jake Lemer from iGaming Business, Oz Mustafa from Gambling Insider, yours truly from CalvinAyre.com and Peter Greenhill from Equiom Group as the referee. Owen took five penalty kicks per media rep and I was with winner with a total of two saves, thank you very much.

Finishing off a busy day on the expo floor was the annual NetEnt branded slot reveal, something that has become a tradition for the NetEnt team each year at ICE. This year NetEnt CEO Per Eriksson invited delegates to join him for refreshments and nibbles at his booth as he revealed a Jimi Hendrix branded slot coming out on the 21st of April and a Motörhead slot coming out on the 22nd of September. “The theme for 2016 is NetEnt rocks”, he told CalvinAyre.com.

Also on display at the NetEnt booth were some of their ideas for innovations to launch in the future. A virtual reality Jack and the Beanstalk branded slot coined “Jack’s VR World” was available for testing out, a popular attraction at the booth for delegates, especially seeing how big virtual reality technology promises to become for the gambling industry.

Colossus Syndicate Captain and his army of followers hold breath for £200,000 win tonight
Press Releases
15 May 2017